23/04/2020 - With care and great skill, French-American documentary-maker Sabrina Van Tassel lifts the veil on the miscarriage of justice which led Melissa Lucio to be placed on Texas’ death row

"Melissa was an ideal target, easy prey: an uneducated mother living in poverty who looked guilty in everyone’s eyes." In Gatesville prison, Texas, a 48-year-old woman, sentenced to death for infanticide in 2008, has spent 11 long years desperately awaiting the end of the appeals process which might absolve her or condemn her to capital punishment. "It’s hard waking up every morning in the same horrible cage, to spend time with people full of rage, to think about the future when I’m fixated on the past, to feel loved when your family is so far away, to forget the mistakes which have caused so much pain, to turn the page when my life makes no sense."

It’s to this woman, Melissa Lucio, brought down by an unfavourable social environment and a faulty police and judicial system, that the French-American filmmaker Sabrina Van Tassel has decided to devote The State of Texas v. Melissa [+see also:
trailer
film profile], a captivating, rigorous and incisive documentary, presented in a world premiere within the Viewpoints section of the 19th Tribeca Film Festival (currently unspooling online for juries and professionals).

Supported by intelligently assembled archive materials from various sources (police interrogations, newspaper cuttings, Child Protection files, family home movies and photos, etc.), the film winds back the clock to examine the circumstances surrounding the death of two-and-a-half-year-old Mariah, one of Lucia’s 14 children. "I’d never seen such a serious case of child abuse. She was covered in bruises from head to toe. In my mind, it was murder", the coroner remembers, a conclusion which seems to be corroborated by the confessions offered up on film by an apathetic Lucio, in tears at Harlingen’s police station and urged to demonstrate by way of a doll just how hard she smacked her children’s bottoms. But as shown by the director’s methodical counter-enquiry (based upon a particularly well-constructed script), this case involving the first Hispanic woman to be sentenced to death in Cameron county is nowhere near as clear-cut as it seems.

Through a succession of testimonials (Melissa’s mother, sisters, brother and children, a private detective, lawyers, a psychologist, prosecutors...), Sabrina Van Tassel methodically dissects the past of a woman who was a victim of sexual abuse in her early youth ("I let everyone make a victim of me and it’s never stopped"), who married at 16 and was trapped in the spiral of poverty ("she lived in dilapidated apartments. They went through garbage cans") and drugs, but who was always gentle and loved by her children: "Melissa’s past and personality don’t seem to fit with the crime committed".

Caught up in her own personal traumas and trapped in the vice of a hastily-conducted enquiry and rigged judicial system (election politics, if not corruption; non-existent defence) which turned a blind eye to a family secret which could have absolved her, Melissa Lucio comes to represent a startling economic underclass in America. By shining full light on this dark, hidden underside, The State of Texas v. Melissa painstakingly examines each and every layer of this case, and offers up a remarkably effective and moving portrait of a woman and a victim of a great injustice which there’s still enough time to put right.

Produced by Isaac Sharry for Vito Films, The State of Texas v. Melissa was co-produced by Tahli Films (who are also in charge of international sales) alongside Andaman Film.

more about: The State of Texas v. Melissa

With care and great skill, French-American documentary-maker Sabrina Van Tassel lifts the veil on the miscarriage of justice which led Melissa Lucio to be placed on Texas’ death row 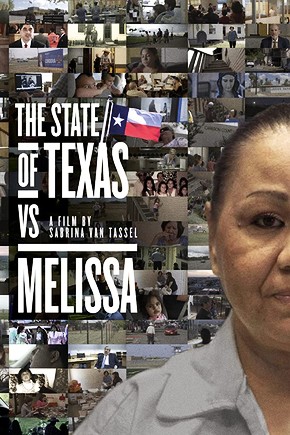