27/04/2020 - Mo Scarpelli’s third outing shows why employing your father to act in your film may not be the best idea in this tale of estrangement, love and moviemaking

Mo Scarpelli has a penchant for making films in challenging locations. Her debut, Frame by Frame, made alongside Alexandria Bombach, detailed the story of four photojournalists working in Afghanistan. Her sophomore effort, Anbessa [+see also:
trailer
film profile], explored construction, globalisation and Westernisation through the eyes of a ten-year-old boy in Ethiopia. Her third feature, El Father Plays Himself [+see also:
trailer
film profile], takes place on a film set in Venezuela, starting in Caracas before quickly moving to the Amazon rainforest. It is world-premiering in the International Feature-Length Film Competition at the 2020 Visions du Réel festival.

It would be wrong to think of El Father Plays Himself as a “making of” documentary. Although all the action takes place during the production of La Fortaleza [+see also:
film review
trailer
film profile], which debuted earlier this year at International Film Festival Rotterdam, the title of that film remains unmentioned. It is like social distancing, before the arrival of COVID-19. Also, as Keith Fulton and Louis Pepe’s Lost in La Mancha (2002) demonstrated, the best documentaries made on film sets are those about the people making the film.

Scarpelli is not so interested in the chaos of filmmaking – although there is some of that, too – and instead turns her attention to the dynamics of the relationship between director and actor. In El Father Plays Himself, this connection is further complicated by the fact that the director, Jorge Thielen Armand (2016’s La Soledad), cast his dad, fifty-something Jorge Roque Thielen, to act in his first movie.

Making a feature with one's dad would be complicated at the best of times, but when said father is a stubborn alcoholic with a healthy scepticism of authority, it's likely to be troublesome. There is some forewarning of the trouble in store when his father aggressively complains about his actor's contract stipulating that he sign over his image rights to his son.

The director's producing partner questions whether Armand is making the right casting choice, even suggesting the project be postponed until a replacement is found. It's an impossible request because, aged 15, the director left Venezuela, and has written a film based upon his father's life, concentrating on his years spent illegally gold mining in the 1990s. The desire to tell the story seems to stem from the director’s wish to reconnect with his father in some way, and getting his dad to quit his job and act in his film is how far he's willing to go to seek rapprochement and build a relationship. Sigmund Freud and Carl Jung will be doing somersaults in their virtual cinema.

Scarpelli doesn't make any big pronouncements; she is an interested observer. What is not revealed is that the father is also her father-in-law. But being married to the director means she has incredible access – and complete trust. She is able to portray the vulnerable side of the filmmaker without needing to resort to exposition, revealing the inner turmoil lurking behind his seemingly calm exterior. The concentration on the psychological aspect of this relationship, the unpredictable behaviour of the leading man and the beautiful Amazonian landscape has echoes of My Best Fiend (1999), Werner Herzog's loving ode to the boisterous Klaus Kinski, with whom he would make five films.

In contrast to her previous two features, Scarpelli avoids looking at what is happening in the country at large. Apart from one poster of President Maduro, seen while driving from one of the locations, the film steers clear of any direct discussion on the disputed 2018 election. It's a smart choice, as there is already plenty of drama in her fascinating observations of filial relationships.

more about: El Father Plays Himself

Joining Italian director Francesca Mazzoleni’s film on the podium is the Finnish offering Anerca, Breath of Life by Markku and Johannes Lehmuskallio

The larger part of the original programme for the Nyon festival’s 51st edition (running 17 April – 2 May) will be available to view online, free of charge 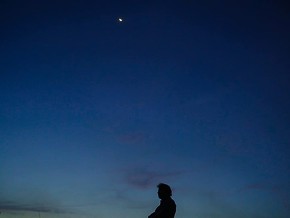 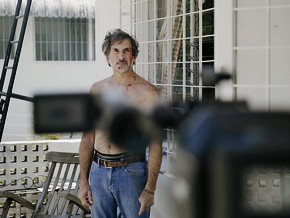 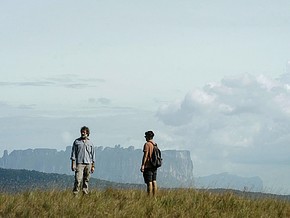