28/04/2020 - With his documentary on the Gaza Parkour Team, Emanuele Gerosa sensitively relates the painful and frustrating situation of young Palestinians in the Gaza Strip

Parkour is the art of overcoming obstacles, but in the Gaza Strip it’s much more than that: it’s a form of survival, plain and simple. In a place where there are walls and barriers everywhere, this acrobatic sport is one of the few ways of feeling free: jumping, spinning through the air, taking risks. It’s into the midst of the young Palestinians practicing this discipline, which first appeared in the 1990s on the streets of the inner Parisian suburbs, that director Emanuele Gerosa plunges us with his documentary film One More Jump [+see also:
trailer
film profile] – now in the national competition of the Visions du Réel Festival’s online edition, following its premiere last October in the Alice nella Città section of Rome Film Fest – an especially significant, evocative yet never rhetorical work which demonstrates respect and sensitivity towards the painful and frustrating situation faced by these youngsters.

The film follows the two opposing fates of two friends, Jehad and Abdallah. The former lives in Gaza, taking care of his ailing father and dreaming of escaping to Europe; the latter has managed to escape the Strip and lives in Italy, but he dreams of going home one day. Abdallah founded the Gaza Parkour Team some years earlier and Jehad took up the torch when his friend moved away. He has never really forgiven Abdullah for his departure (“we were supposed to leave together”) and they haven’t spoken since. And so Jehad carries on teaching children and teens under the watchful eye of Israeli drones (“and you, too, should teach it to those who come after you”), while Abdallah, who wants to take it further and become a professional athlete, decides to take part in an international parkour competition in Sweden.

Jehad runs and jumps with his team amidst the rubble and skeletons of bombarded buildings in Khan Yunis; Abdallah trains in the underpasses of Florence’s railway station or on riverbanks. The camera runs closely behind them in a blaze of breath-taking acrobatics, and the effect is spectacular. But the doleful faces of the two protagonists are the real cornerstones of this documentary. A lack of prospects, a sense of imprisonment and a desire to discover the world, on the one hand; integration difficulties, nostalgia for one’s homeland and the knowledge of not ever being able to return, on the other. Jehad and Abdallah embody the contradictions of a generation of Palestinians forced to live in an open-air prison and to feel like strangers wherever they go, even in their own home. Desperation is written all over their faces and, when faced with the Swedish competition’s plywood-based obstacles and its auditorium full of happy, good looking youngsters, the sense of alienation we read in the eyes of Abdallah, who’s accustomed to performing somersaults between ruins and columns of smoke, sums up the whole film perfectly.

more about: One More Jump

Between 19 February and 18 April, by way of the online MyMovies platform, Italy's Rete degli Spettatori will offer up a selection of 10 recent titles which reflect critically upon reality

With his documentary on the Gaza Parkour Team, Emanuele Gerosa sensitively relates the painful and frustrating situation of young Palestinians in the Gaza Strip 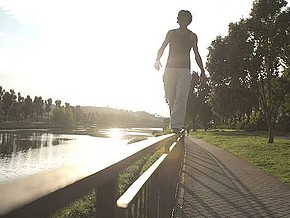 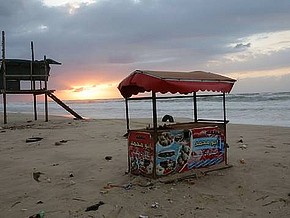 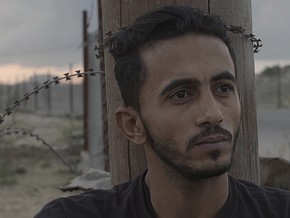 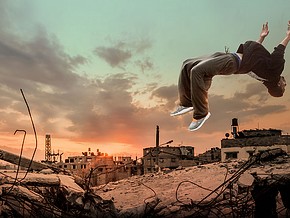 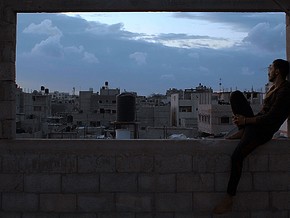