29/04/2020 - In their first feature-length documentary, Ukrainian directorial duo Yarema Malashchuk and Roman Himey are losing their religion, one drone at a time

As anyone growing up surrounded by organised religion would surely attest, the mundane always goes hand in hand with the spiritual, somehow – however disheartening that may sound. Preachers of different persuasions tend to mention their parish’s finances in the same breath as God’s name, believers are encouraged to exchange the kiss of peace but also to make donations, while holy statues need a good dusting off from time to time, regardless of their clout. And when people look up in the place of worship, just like in the Docudays (24 April-3 May) national competition entry New Jerusalem [+see also:
trailer
film profile] by Yarema Malashchuk and Roman Himey, they might be praying, sure. But also talking about renovation.

This permanent duality never escapes their documentary either, focusing on the pilgrimage to Zarvanytsia that hundreds embark on every single year – just like the ones to Fatima in Portugal, Częstochowa in Poland or Lourdes in France, observes one hapless TV presenter once he finally gets a word in, drowned out by the passing cars. Zarvanytsia is a spiritual centre now also boasting a complex dubbed the “Ukrainian Jerusalem”, as Cineuropa found out, which was sanctified in 2018 and offers visitors life-sized replicas of such must-see spots as Calvary, where Christ was crucified, or the olive garden where he prayed. But even before reaching the final destination, every wall shown here is adorned with holy pictures, and yet all people seem to talk about is money. Or a fancy stove that even “a blade wouldn’t cut through”, as explained by the proud owner.

If there is a bone to pick, it’s that it all seems a bit too easy sometimes – too easy to mock what some clearly believe in and what brings them joy, even though they insist on singing religious songs with a smartphone – or, in some cases, a drone – never absent from their hands. This directorial duo certainly has an eye for human weakness, with all the “Gucci” shirts and unfortunate umbrella hats, small talk that has nothing to do with religious awakening or yet another example of “tyre art”, this time sculpted into a graceful swan. Which is probably what makes it such a fun, if not terribly sympathetic, watch, then turning into flat-out funny once a cameraman emerges from behind a preacher, sweating profusely or warning just about everyone against raising their heads too much because their “nose holes will be too big in the picture”. Good advice, by the way.

And yet, hallelujah, for all the weirdness and an occasional local nutter craving media attention while complaining about Gypsies stealing his money, there is the odd moment of truth shining through. It usually appears without much fanfare, in the guise of an old lady visiting the graves of her loved ones, just to say hello, or a community forming here against all odds – possibly the very reason why so many come back, year after year, undeterred by the quarrelling, pushing and “what kind of Christians are you?” name-calling. “It is possible to see a lot of things there,” says one worshipper while looking at a rock, supposedly similar to the Virgin Mary herself. The same could be said for this film.

New Jerusalem was produced by Valeriya Sochyvets and Contemporary Ukrainian Cinema, which is also handling the sales, with the support of the Ukrainian State Film Agency.

In their first feature-length documentary, Ukrainian directorial duo Yarema Malashchuk and Roman Himey are losing their religion, one drone at a time 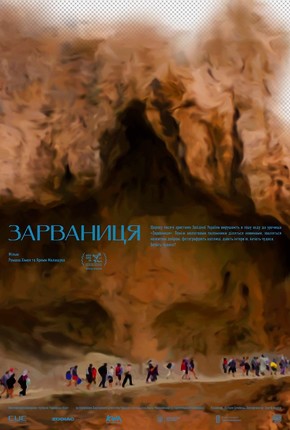