30/04/2020 - In his documentary, screening at this year’s Docudays, Roman Liubyi broadcasts directly from the battlefield

As far as dealing with its still-festering war experience goes, Ukraine is clearly just warming up. This is also the case when it comes to cinema, and although recent offerings range from good to bad and plain ugly, there is still a sense of urgency in these films – the desire to eliminate all the middlemen and get as close as possible. This is something that Roman Liubyi’s War Note [+see also:
trailer
film profile], shown in the national competition at Docudays (24 April-3 May), actually manages with aplomb.

That’s for a very simple reason: this patchwork doc, as is revealed quite early on, is “composed of films by Ukrainian war fighters, soldiers and volunteers”, all coming directly from their smartphones, camcorders and what have you, sometimes stopping so abruptly that one can only wonder what went on after the screen went black. While the access is unparalleled, it’s still a much better idea than the film itself, with its never-ending flow of shaky shots that are bound to launch a thousand headaches. And yet, despite proving rather tiring at a running time of 70 or so minutes, when it hits, it hits hard – hard enough for its witnesses to care if there will be a date accompanying these wannabe “cinematographers” in the end credits, or hopefully just a weird nickname.

A nickname like “Goose”, borrowed from Top Gun – one of the many examples of when Liubyi favours (and who could possibly blame him) moments of levity found among the pure madness and countless attempts at long, uninterrupted shots of the battlefield, which thanks to Sam Mendes are now officially a thing. And so videos of a soldier on a swing or playing with a floppy-eared puppy, clearly glad to see someone – anyone, really – make their way in. There is also someone reporting that he has found some grapes, grinning happily, as “the war may go on, but lunch should be on time”, says his buddy. But just as these pleasant enough “svejkianisms” start to take over, reality comes storming in once again, at full speed. And it ain’t pretty.

Aided by Volodymyr Tykhyi, Liubyi does a damned good job of editing it all into something that actually gives this conflict some kind of twisted identity, as one can always attempt to keep his spirits high, but war is not fun – they never are – and in no time, some petrified kid is informing his mother that half of their house has been blown away. There are many moments here that are not easy to watch, making one wonder why the hell these men would record it at all: the suffering, the fear, the utter destruction of many of the homes they come across, bits and pieces of them crunching under their boots. Then again, why wouldn’t they? “If I die tomorrow, at least there will be something left,” observes one, only to be advised to bite his tongue before it’s too late and before that screen goes black, again.

In his documentary, screening at this year’s Docudays, Roman Liubyi broadcasts directly from the battlefield 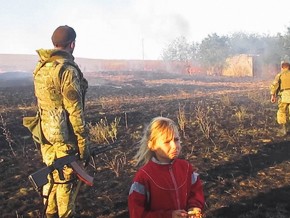