26/05/2020 - Iranian filmmakers Atieh Attarzadeh and Hesam Eslami deliver a touching and rather bright documentary with a melancholy undertone, set in a Tehran psychiatric hospital

The Marriage Project [+see also:
trailer
film profile] by Iranian co-directors Atieh Attarzadeh and Hesam Eslami, which has world-premiered in the Thessaloniki Documentary Festival's Newcomers competition, provides an insight into a hopeful but potentially controversial experiment conducted in a psychiatric hospital in Iran.

Located in southern Tehran, Ehsan House is home to some 480 patients. The idea of the hospital's new head, Dr Farhad Ramazannejad, is to give at least some of them a chance to form romantic relationships. He recognises the sexual needs and emotional hopes of the patients, and a committee is formed to identify the men and women who might be able to live in a partnership. A new mosque is being built on the hospital grounds, and the future couple would be in charge of taking care of it, with a studio apartment built for them above the temple.

Meanwhile, we get acquainted with some of the patients, and the two who stand out are very much in love. Sahar and Seyfoulah are so close that the passion between them is palpable, despite them not being allowed to touch each other. They usually meet in the greenhouse where Seyfoulah cleans and waters the plants. Sahar wakes up early in order to prepare herself, make-up and all, for their rendezvous. They have known each other for 12 years and have become very close. But is this enough? Both are diagnosed with paranoid schizophrenia, so despite their affection, their chances of being truly united are slim.

On the other hand, the committee manages to come up with a couple that could potentially work: Marjan is 42 and really only wants to have a baby, completely aware she would not be able to raise it. Behrouz, on the other hand, is an older, very quiet man and an expert in textiles. But this might not be enough either, because Marjan's father has to allow it.

In a third strand, we follow Attarzadeh's personal story, revolving around her marriage with a man who eventually had to be committed to one such institution. She started making a film about him, and some of this footage is included, with her voice-over. These segments are haunting and represent some of the most touching parts of the film, leaving the viewer wanting to learn – and feel – more of Attarzadeh's own story.

As far as the psychiatric hospital sub-genre of documentaries goes, The Marriage Project is quite accomplished in the way it explores and treats its protagonists. The viewer gets especially connected to Sahar and Seyfoulah, and Marjan is perceived as unfortunate, rather than ill – she is under strong medication, but her self-awareness is still quite impressive.

And as far as psychiatric hospitals go, Ehsan House is far from the worst that we have had the chance to see in documentary cinema. A lot of the patients lack teeth, and almost everybody smokes – both of which go hand in hand with the heavy meds. They do sleep in large dormitories with a lot of beds, but there is also a big, open space in the yard with gardens, and they do not seem to be controlled too strictly – there’s barely a guard in sight, so the overall impression is bright and hopeful, rather than bleak.

more about: The Marriage Project

Iranian filmmakers Atieh Attarzadeh and Hesam Eslami deliver a touching and rather bright documentary with a melancholy undertone, set in a Tehran psychiatric hospital 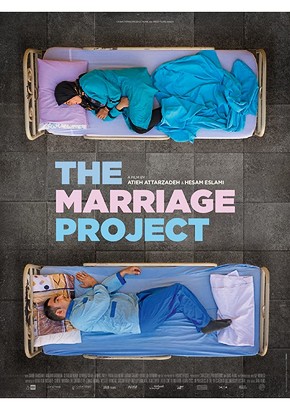