29/05/2020 - Greek filmmaker Menios Carayannis reminds us of the essence of the things that we love doing through this immersive, sensorial, dialogue-free documentary about three craftsmen

The latest effort by Menios Carayannis, The Music of Things [+see also:
trailer
interview: Menios Carayannis
film profile], which has just won the FIPRESCI Award for Best Greek Film at the Thessaloniki Documentary Festival (see the news), follows three craftsmen and immerses the viewer in their work through a sensory approach that forsakes a narrative and even dialogue, resulting in a refreshing and enjoyable 90 minutes.

The three men are Yiorgos Katsanos, a musician, Giannis Giannoudakis, a carpenter, and Homer Vlaxos, a photographer – but true to the nature of the film, their names are only listed in the closing credits. Katsanos, who, according to Carayannis (see the interview), usually plays with bands and composers, for this film seems to be dabbling in the sub-genre of ambient music known as field recordings. This means that he records the sounds of nature and repurposes them as pieces of music, but he also plays instruments including a synthesiser and a traditional Greek santuri through gadgets like effects processors in spaces with especially good acoustics – like a church or a stone corridor in an ancient village – often feeding the sound back through a speaker to achieve atmospheric effects.

Vlaxos is a nature photographer, particularly interested in complex structures and detailed textures. We watch him as he takes macro shots of leaves, flowers and insects, but also wider images that range from forest paths to rocky landscapes to, in the end, long-exposure photos of the night sky.

While the efforts of the musician and the photographer are inherently cinematic, and the director focuses literally only on their work, with Giannoudakis, the situation is a bit different. He does his carpentry in a large workshop, apparently situated somewhere on the edge of some woods, and it is often hard to tell what it is exactly that he is making. So the film also captures him doing kata in full kimono or playing a steady rhythm on a djembe in a meditative setting. Also, there is a dog and a bunch of cats in his yard that get along wonderfully, so we get to enjoy some of their playful escapades, too.

As there is no dialogue in the film, the sound design comes to the fore. In this respect, it is hard to tell where Katsanos' creation ends (all of the music in the doc is composed and performed by him) and where Carayannis' interventions start, but that is exactly the point. As the diegetic music and effects from one scene flow into another and combine with a shot of the photographer as he pushes his way through tree branches and bushes in the woods, or with the carpenter sawing, cutting, hammering or sandpapering, the director achieves a fusion of elements with their own, enticing expression.

Similarly, with his camerawork, Carayannis follows the nature and vibe, rather than the logic, of each of the crafts. So when he trails Vlaxos through the woods, the tracking camera is often tilted. When he films the carpenter in his workshop, he uses a lens that creates a concave image. And when the musician is playing along to (or recording) the wind by a rock above a bay, his back is turned to the camera and we watch the sea in the distance.

The Music of Things makes for a refreshing and relaxing viewing experience through a truly immersive sensorial approach, a welcome respite in this time of information overload and issue-driven documentaries that dominate the festival scene. It highlights the value of dedicating yourself to the essence of your work and the things you love in life, as opposed to trying to get as much work done so that you can move on to the next task. It’s a heartfelt reminder of why we started doing something in the first place.

The Music of Things is a production by Greece's Skapeta Films.

more about: The Music of Things

“A documentary takes you wherever it wants, not wherever you want”

Greek filmmaker Menios Carayannis reminds us of the essence of the things that we love doing through this immersive, sensorial, dialogue-free documentary about three craftsmen

Welcome to Chechnya triumphs at the 22nd Thessaloniki Documentary Festival

Walchensee Forever and The Year of the Discovery also won the newly introduced Golden Alexanders at the festival, which went online this year 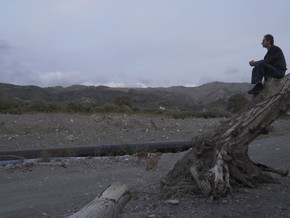