Rocambola [+see also:
trailer
interview: Juanra Fernández
film profile] is the third film directed by Juanra Fernández, who made his debut in 2012 with Para Elisa before putting his name to De púrpura y escarlata six years later. Now, he’s calling upon a rich cast in order to bring to life this cruel and tense tragedy where roles are sometimes reversed, and which is peppered with surprises and twists and turns unfolding in very few locations. Standing tall among them all is lead actor Juan Diego Botto who – altering his tone of voice to make it deeper – offers up a central character closely resembling Robert de Niro’s baddie in Cape Fear.

Here, the protagonist of unreleased work The Europeans plays Saeta, a flesh and blood demon blinded by his thirst for revenge and wounded by a loved one’s betrayal. He will face up to Dante, brought to life by Jan Cornet who is once again working with Juanra Fernández and enduring the same imprisonment, abuse and manipulation that he suffered in The Skin I Life In [+see also:
film review
trailer
interview: Pedro Almodóvar
film profile] by Pedro Almodóvar. Sheila Ponte completes the cast, with Elisa Matilla and Ana Alvárez making fleeting appearances.

Divided, like The Divine Comedy, into three parts – Hell, Purgatory and Paradise – but arranged in inverse order in Fernández’s self-penned screenplay, Rocambola takes its name from another literary figure: the character of Rocambole from the 19th century novels about thieves in kid gloves, created by French writer Pierre Alexis Ponson du Terrail. Except that here, murkiness, aggression and ambition levels are greater and, above all, extreme.

With the surprise factor that pervades its opening scenes, Rocambola is a foray into independent film which attempts to place three unique characters in one house in such a way that they can be followed continually and that the tension between them rises. At times it’s successful, at others, it’s the forced result of an exaggerated or frankly nonsensical action, though the atmosphere is unfailingly claustrophobic, suffocating and aggressive.

Shot in Toledo and Cuenca, Rocambola is a Marcianetes Films production distributed by Begin Again Films. It is released in Spain today, Friday 5 June, courtesy of the Filmin platform.

"During the lockdown, the platforms have demonstrated that they are extremely necessary"

We phoned Juanra Fernández, the director of the tense Spanish thriller Rocambola, which is being released online this Friday, on the Filmin website 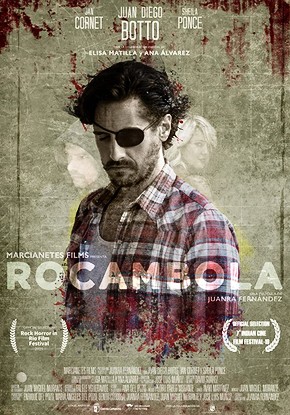