09/06/2020 - Marco Simon Puccioni rolls the camera into his own home to recount the daily life of his rainbow family, placing focus on the viewpoint of his children

A director and producer who has always paid careful attention to social issues and civil rights, Marco Simon Puccioni is returning to the film world seven years on from the much appreciated Like The Wind [+see also:
trailer
interview: Marco Simon Puccioni
film profile], with a documentary on rainbow families and his own home in particular. A father, alongside his partner, to two children born to a surrogate mother, the director is now rolling his camera into his own home to give us All Together [+see also:
trailer
film profile], a film presented in competition at the 16th (online) Biografilm Festival which documents, over the course of three years, the daily life of this affectionate and happy family unit - composed of “daddy”, “dad” and twins David and Denis – and follows the children from age six to age nine.

Having documented the process which led to the twins’ birth in an earlier film from 2012, Prima di tutto, Puccioni waited until his twins had reached an age where they could express themselves directly and speak about their world in their own words before moving on to this second chapter in a wider project, which the director devised so as to follow his sons’ evolution in the world. What, therefore, is life like for two children who have two fathers? Normal, one might say, if it weren’t for the countless questions their contemporaries ask, not least: “Who is your mum?” The answer comes through a journey across the US to Los Angeles, where we’re introduced to a blended family composed of Cynthia, who carried the children in her womb, Amanda, who donated her eggs, and their respective children and husbands, who, when joined with Puccioni’s, form a joyful and tight-knit “super family”.

But Cynthia and Amanda aren’t the children’s mothers; they’re not even their aunts. Indeed, one issue that’s addressed during the director’s discussions with his partner Giampietro and with other rainbow fathers, is precisely the need to find new words to describe new relationships; terms which aren’t quite so formal as “carrier” and “doner”, so as to avoid confusion and to allow these children to grow up without having to answer too many questions. In the meantime, over the course of the three years in question and in addition to the day to day life of David and Denis who flit between school, friends and seaside holidays, we see marches for the rights of same-sex-parent families, as well as protests in favour of traditional families; there’s enthusiasm over the approval of the civil partnership law, but also disappointment over the lack of recognition given to same-sex parenthood. And then there’s Marco and Giampietro’s wedding, which is finally permitted by law and which helps wider society, not to mention their own individual families, to accept the couple’s reality.

An important springboard for thought on the evolution of the family unit in Italy, Puccioni’s documentary places the thoughts and viewpoint of his children - who are the real bringers of change - centre stage. Because, as is pointed out by one rainbow father whom the director engages with, “what was originally a brave choice for us is now the only life our children know”. In truth, nothing is set in stone, and this is another message conveyed by the film. “We’ve tried to do everything the best way that we can, telling them the truth”, say Marco and Giampietro. The next chapters in this project are sure to prove interesting as we follow the evolution of David and Denis, and of our country in its treatment of rainbow families.

All Together is produced by Giampietro Preziosa on behalf of Inthelfilm, in league with Rai Cinema.

more about: All Together

VENICE 2020: Andrea Segre’s new film is an intimate, melancholy and moving story shot before and during the lockdown period

Marco Simon Puccioni rolls the camera into his own home to recount the daily life of his rainbow family, placing focus on the viewpoint of his children 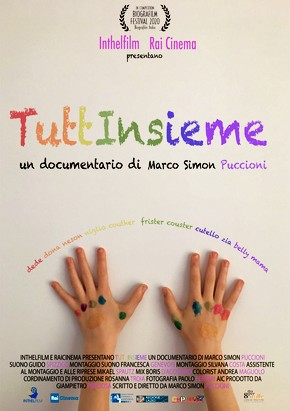 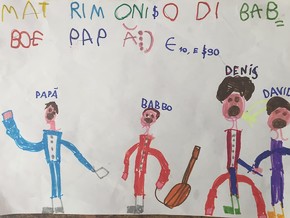