07/07/2020 - Jean-Pascal Zadi and John Wax deliver an energetic and politically incorrect comedy, mixing together political engagement and offbeat humour, about the place of black people in French society

"In the United States, there was Martin Luther King, in South Africa there was Nelson Mandela. If, in France, there isn’t anybody, then there will be Jean-Pascal Zadi." As the Black Lives Matter wave and its French reflection via the Adama Traoré protests are making headlines, the release in French cinema through Gaumont on 8 July of Jean-Pascal Zadi and John Wax’s Tout simplement noir [+see also:
trailer
film profile] feels completely apt. A caustic comedy about identity and the place of black people in French society, the film lands like an UFO among the usual national productions, surfing without any filters on a powerful tone of self-deprecation to reveal and denounce profoundly rooted problematics that are too often avoided or caricatured, touching on everything from racism to antiracism, via communitarianism, activism, difference and the universal, humanism and extremism.

“My name is Jean-Pascal, I’m 38 years old and I’m angry because the situation of black people in this country is catastrophic. We are nowhere, we’re not in the media, we’re not in the cinema, we’re not in politics, and I get the feeling that it doesn’t bother anybody. Well, it bothers me. That’s why I’ve decided to organise a black protest march on the place de la République.” Facing the camera, JP, a struggling actor and small online celebrity thanks to his controversial interventions (“activist or opportunist?”) denouncing colonisation, the spoliation of Africa, the treatment of black people and their invisibility in many sectors of French cultural life, has taken on a new mission: to convince influential personalities from his community to participate in his movement. All this while being constantly followed by a small camera. But as endearing as he might appear, JP is also clumsy, megalomaniac and egocentric, and although his project is well received, the next steps will be far from easy…

Stand-up comedians (Fary, Fadily Camara), rappers (Soprano), actors (JoeyStarr, Fabrice Éboué, Éric Judor, Lucien Jean-Baptiste, Claudia Tagbo, Lucien Jean-Baptiste, Ramzy Bedia, Jonathan Cohen, Mathieu Kassovitz, etc.) and iconic figures from the world of sport (Lilian Thuram, Vikash Dhorasoo) and media (Kareen Guiock) have participated, playing themselves in this diverting and incisive mockumentary (that is also instructive at times). Destroyed with the same force in the chaotic wake of JP are white people’s outlook on black people (casting calls ranging from “dealer, rapist, person converted to Islam”, and “you’re not an African from Africa, you’re an African from Paris”), black people’s own questioning of themselves (what about mixed race people? Voluntary seclusion in racial stereotypes; forms of activism that can be very rigid or strangely elastic), the limits of interfaith antiracism (“imams don’t give me good vibes”), the temptations of fame and fortune (the project of “comedy that reassures white people, comedy of cool black people”), great causes and their much less glorious compromises. The film is a series of dynamic, funny and bitter misadventures, unafraid to talk plainly with refreshing punch and without pretension, its positive message subtly getting across from underneath its burlesque subversion and its ambitions echoing the words of Tupac Shakur: “I'm not saying I'm gonna change the world, but I guarantee that I will spark the brain that will change the world.”

Tout simplement noir was produced by Gaumont which is also handling international sales.

Jean-Pascal Zadi and John Wax deliver an energetic and politically incorrect comedy, mixing together political engagement and offbeat humour, about the place of black people in French society 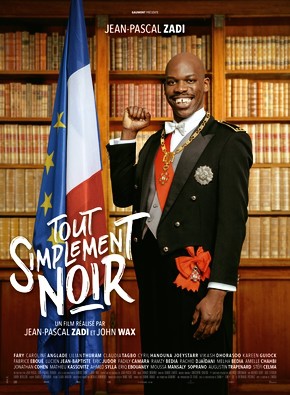 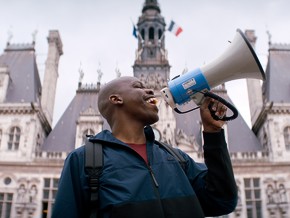