Aaron Monaghan in Redemption of a Rogue

Philip Doherty’s dark comedy Redemption of a Rogue [+see also:
trailer
film profile] was the big winner of this year’s Galway Film Fleadh (7-12 July), crowned Best Irish Film and Best Irish First Feature (see the news). The film is the debut feature by Doherty, who is best known in Ireland as a playwright and as the artistic director of the Cavan-based Gonzo Theatre Company. Before working on the comedy, Doherty also directed the comedy series The Begrudgers, the project for which won RTÉ’s StoryLand web-drama competition in 2012.

Redemption of a Rogue tells the five-chapter story of a man called Jimmy Cullen (the truly talented Aaron Monaghan), who returns home to the fictional village of Ballylough (located in West County Cavan) to visit his ailing father and seek redemption before he intends to say goodbye to the world. His plan is clear from the very beginning, as we see Monaghan carrying around a doctor’s bag and visiting a hardware shop to choose a suitable rope. The scene set in said shop (and its ludicrous dialogue with the owner, played by Shane Connaughton) is a great piece of comedy and sets the tone for the entire film, as we see Jimmy discussing the best possible rope for his suicide. Besides the surreal exchange, the scene shows off some excellent editing work for comedic purposes and masterfully highlights the absurdity of the characters and the situations they are in (mostly through jump cuts and other fun juxtapositions).

Next, as Jimmy’s father breathes his last, thunder rumbles and rain starts to pour. However, in his last will and testament, Jimmy’s father demands not to be buried on a wet day, which makes things much more complicated. The man is thus forced to embark on a sacrificial and outlandish journey to rid himself of the guilt and shame from his past. In particular, his encounter with a singer called Masha (Aisling O’Mara) will play a pivotal role on his path to redemption.

In general terms, this dark comedy vaguely echoes the unsettling atmospheres of the Coen brothers’ flicks, although its uniqueness emerges through some brilliant writing (perhaps influenced by Doherty’s past theatrical work) and the obvious setting of rural Ireland, which serve the film’s narrative purposes well. In addition, there are several memorable splashes of dark humour involving a clumsy suicide attempt witnessed by a group of children, crazy visions with duelling coffins, the freezing of the father’s corpse by surrounding it with frozen pizzas and a surreal conversation with the Virgin Mary, among others. Furthermore, the pleasant original score by Robbie Perry further emphasises the film’s peculiar mood and is occasionally played intradiegetically. In one of the first scenes, for example, a group of musicians suddenly stop playing after they notice Jimmy passing by. Overall, the final result achieved by Doherty is truly commendable and will hopefully pave the way for his future film endeavours.

Redemption of a Rogue was produced by Emma Foley and Tamryn Reinecke for Dublin-based outfit Pale Rebel Productions. Wildcard Distribution will release the movie in cinemas later this year.

more about: Redemption of a Rogue 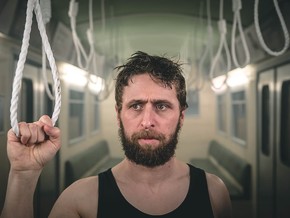