31/07/2020 - David Ilundain, like other filmmakers before him, enters an imaginary classroom to document little-known conflicts between young people, the dynamics between them and their teachers

David Verdaguer in One for All

Cinema, in particular French cinema, has often allowed us to look into a world we can only vaguely remember with the distance of time, but which we now know even less, being adults: school, with its lights and its shadows. It is enough to recall films such as The Class [+see also:
film review
trailer
interview: Carole Scotta
interview: Laurent Cantet
film profile], It All Starts Today or Once in a Lifetime [+see also:
trailer
film profile], without even mentioning worldwide successes like Dead Poets Society — the film which one of the pupils of the supply teacher played by David Verdaguer claims to have seen in One for All [+see also:
trailer
interview: David Ilundain
film profile], the new film from Navarrese director David Ilundain, following his acclaimed first feature B, la película [+see also:
trailer
film profile] in which he reconstructed the anti-corruption trial against former Spanish conservative party treasurer Luis Bárcenas.

Now that children have stopped going to school physically due to the pandemic, it is curious to see what face-to-face lessons were like — and we hope, will return to be — the conflicts inherent to them which online lessons cannot recreate, but which demonstrate — it must not be forgotten — that school does not only have an academic function. It is also a melting pot for personal relationships and coexistence: a place where the youngest first begin to take individual decisions and to relate to others in a more or less harmonious way, creating a micro-society which reflects the world that is awaiting them outside of these walls. None of this happens online, although we continue to acquire knowledge.

The film — written by Coral Cruz and Valentina Viso — is also a naturalistic portrait of a group of children from a city who know each other beyond the physical limits of the school. With an almost documentary aesthetic and based on a real story (the idea for the film was born from a story read in a newspaper), the film turns into a fairy tale and appeals to principles such as friendship, education in values and the acceptance of differences.

One for All, which had its world premiere at the latest edition of the Miami Film Festival, opened the recent edition of the BCN Film Fest and can be seen by both parents and children (it is authorised to viewers aged seven-years-old and older). The film talks of committed teachers and of a way of education where respect and coexistence prevail, but reveals itself somewhat light in its development, never exciting or provoking more than a slight complicit smile in the viewer.

One for All is produced by Inicia Films, Fasten Films, A Contracorriente Films, Bolo Audiovisual, Uno para todos AIE and Amalur AIE, with the participation of TVE, TVC, Movistar+, Rakuten Cinema, Aragón TV with the support of ICAA, ICEC, Gobierno de Navarra and MEDIA Europa Creativa. Distribution is handled by A Contracorriente Films, and international sales by Film Factory.

more about: One for All

Interview: David Ilundain • Director of One for All

“We, the adults, do not know what really happens inside schools”

The feature debut by the short-film director, boasting a screenplay co-written by Pilar Palomero, is being produced by Inicia Films and Jaibo Films, with distribution by Filmax

David Ilundain, like other filmmakers before him, enters an imaginary classroom to document little-known conflicts between young people, the dynamics between them and their teachers

David Ilundain filming his second movie, One for All

After his impressive work helming B, la película, the filmmaker is shooting his new David Verdaguer-starring feature, a drama on education and values that has secured MEDIA backing 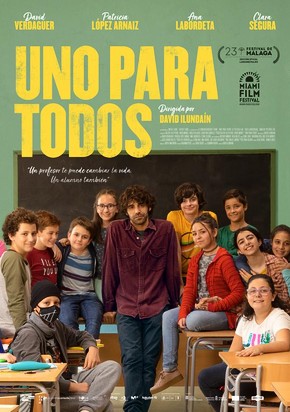 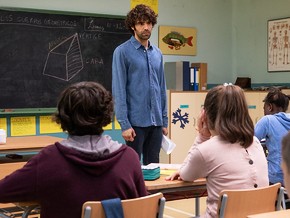