"Step by step, you follow someone else’s text. In the end, it’s as if they were your own ideas. Your thoughts overlap with someone else’s. You can no longer tell where they start or where they end. The ideas of another appear in your own life." These explanations given to translator Kazami Kano, the lead character in Lisa Spilliaert’s N.P, the director’s first feature film which was unveiled in a world premiere within the international competition of the 31st FIDMarseille, sum up perfectly the respectful yet innovative, serious yet jocular spirit with which the Belgian filmmaker tackled the task of adapting Japanese writer Banana Yoshimoto’s eponymous novel.

Interweaving western and eastern cultures, melodrama and distance, reality and fiction, the director made the courageous decision to transpose a captivating and suspense-filled literary tale into a silent film, where dialogue appears in subtitles and music and sound effects take the place of direct sound. It’s a perfectly mastered experiment in genres unfolding against a visual setting steeped in sophisticated simplicity, but which also owes a great deal to the book’s thrilling plot, which kicks off with a tragic event recounted to Kazami (Clara Spilliaert) at a reception by her translator boyfriend Shoji: the writer Sarao Takase who lived in America has committed suicide. He has two children, twins. He’d written a book containing 97 stories and Shoji has discovered a 98th story, as yet unpublished, a tale of incest. Cue an ellipsis, by which we’re projected five years into the future, to the beginning of summer, just as Kazami happens to cross paths (but is it really a coincidence?) with Otohiko (Hiroshi Miyamura), Sarao Takase’s son, and soon after his twin sister Saki (Saartje Van de Steene) and their half-sister Sui Minowa (Mikiko Kawamura). We also learn that Shoji committed suicide four years earlier and that there’s far more that lies beneath the surface of this story… For, as Kazami confesses, "the story of that summer is difficult to explain, the soft rays of the sun, a strong feeling of absence, my absence, the part I played, the place of my own feelings…"

Working on the contrast between the violent, complex emotions (love and death) tormenting its characters and drawing them towards one another, and the restraint they demonstrate as they express them (like "the deepest depths of a sea abundant in blue coral and the supernatural calm of a tropical fish"), N.P borrows from the codes of the photo-novel and adopts an array of simple artifices to spin a very fine web, interwoven with several layers of possible readings beneath its crystal-clear surface. It’s a hugely promising first feature by a filmmaker (also a director of photography in this instance) whose trajectory will be interesting to follow given the many paths and styles now opening up before her.

N.P was produced and is being sold worldwide by Escautville. 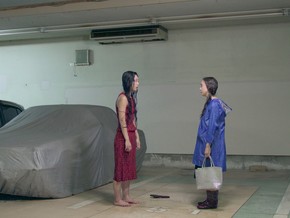