24/07/2020 - Serbian director Jelena Maksimović turns her attention to the past, tiring her viewers along the way

World-premiering at the FIDMarseille, with its physical edition taking place from 22-26 July, Jelena Maksimović’s Homelands [+see also:
trailer
film profile], dedicated to her grandmother and full of autobiographical details, expresses a desire that’s certainly relatable enough: to come back home. Wherever that might be, as borders move and countries change – something a young woman shown here, Lenka (Jelena Angelovski, also the producer of the film), is only too aware of, born in the former Yugoslavia and still remembering her beloved grandmother, who was forced to leave her home town because of the Greek Civil War. It’s a place she never got to revisit, or only in stories told to her little girl.

And so, it’s up to her already grown-up granddaughter to go back – even though the mountain village, now turned into a ski resort, doesn’t really resemble its former self, with tragic history conveniently buried under layers of snow and the constant chatter of business. Out of sight, out of mind, as some say, because in Maksimović’s film, the past exists mostly in the old songs and archive footage, and maybe in someone’s memory still. But as the seasons change, instead of dwelling on what used to be, it might be time to finally move on.

Maksimović sews together a whole lotta pieces here: long shots of the snowbound world or some dancing after hours, after the clients have finally left, and stories of lost climbers and personal struggles, their delivery in heavily accented English punctuated by the screen repeatedly going black as if blinking. Which might be why her intentions, albeit honourable, are sometimes as unclear as the visibility during a local snowstorm. “If you have never been there, it’s difficult for me to explain to you to understand,” says someone here, struggling with the language. And yet he might just have a point.

But – and this might be considered a spoiler, so beware – all that seems convoluted is eventually explained, to a certain extent, in a meandering monologue covering everything from the change of social systems to patriarchy and “houses collapsed from sorrow”. This time (there is no pleasing these pesky critics), it’s done a bit too literally, perhaps, as statements like: “I’m learning to snowboard in a ski centre made upon ruins of my grandmother house, I feel the wind in my hair” quickly descend into pretentiousness – traumatic childhood memories of “interactive” theatre rushing back in as their messenger Angelovski starts to walk towards the camera. It’s easy to understand the love communicated here, or the longing for some kind of roots, for that long-lost domovine of the title. But actually feeling it is another thing altogether.

Directed by Jelena Maksimović, who was also responsible for the editing as well as the script (with Olga Dimitrijević), Homelands was produced by Jelena Angelovski for Serbia’s ENFM, with the company also handling the distribution.

Serbian director Jelena Maksimović turns her attention to the past, tiring her viewers along the way 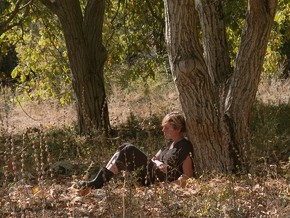