Review: I Am Greta

05/09/2020 - VENICE 2020: Nathan Grossman offers a genuine, often genial, and more or less real-time portrayal of a very eventful year for a maverick combatant

Greta Thunberg – Messiah, or merely a depressed and extremely anxious girl? Surely outlandish proposals, both. Let’s just settle for “The One” – who happened to be in the right place at the right time. As did, by chance, a young director, camera in hand. Two years later, the same director, Nathan Grossman, brings I Am Greta [+see also:
trailer
interview: Nathan Grossman
film profile] to the Venice International Film Festival – fittingly, for its maverick combatant, out of competition.

It all starts outside the parliament building in Stockholm. In late August 2018, with general elections coming up, a waifish teen with braids and a classic 1970s back-to-the-land look turns up with a hand-painted sign. “Skolstrejk för klimatet” it says, which is Swedish for “school strike for the climate”. Initially, few take notice. A well-meaning lady argues that kids should go to school while grown-ups take care of the grown-up things. But every now and then, a supporter turns up, encouraging the activity. Not quite yet, but soon, history will be made.

That this by now familiar chronology was actually documented in more or less real time is close to genial. Grossman had originally heard of a planned one-girl protest, which gave him the loose idea of catching a few snippets for a possible short film. Gradually, this snippet turned into a full feature, following an unexpected main subject through event after event in a very eventful year, culminating in the United Nations Climate Action Summit in New York in September 2019 (thus, perhaps divinely, with no COVID-19 yet to deal with). During this entire time, Grossman managed to genuinely make the film he wanted to make – even when he didn’t know it himself.

While undoubtedly an inspirational addition to the debate on global environmentalism, I Am Greta puts an equal focus on its namesake. Her well-documented Asperger’s diagnosis is addressed in a clear and matter-of-fact manner – no elephants in the room here. Ample space is also provided for Svante, Greta’s father and road manager, adhering to his daughter’s preferences regarding means of travel (electric cars, trains and boats) and food (strictly vegan), but also providing affection and, when required, a small reality check. After all, even a budding Nobel Peace Prize contender needs a Sancho Panza ever so occasionally.

As for the Messiah vs Depressed Girl squabble, the film rather prefers to show us Greta the Catalyst. How does the president of France or the European Union react when she enters their domain? What about UN Secretary General Guterres? Or Arnold Schwarzenegger? These encounters (some bordering on non-encounters) are telling. A priceless shot, incidentally not by Grossman, catches Greta Thunberg in that rarest of milieus – an aeroplane. She may be a little under one year of age. The resolute look in her eyes leaves no room for doubt: she is clearly forging some plan or other, already there and then.

I Am Greta was produced by Sweden’s B-Reel Films, with world sales by Dogwoof.

more about: I Am Greta

Interview: Nathan Grossman • Director of I Am Greta

VENICE 2020: We sat down with Nathan Grossman to chat about I Am Greta, world-premiering out of competition, and its global phenomenon of a protagonist

Review: I Am Greta

VENICE 2020: Nathan Grossman offers a genuine, often genial, and more or less real-time portrayal of a very eventful year for a maverick combatant 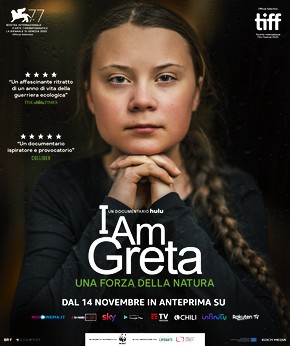 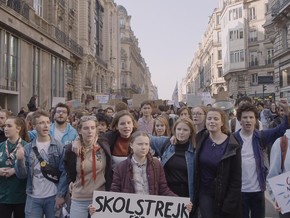