Mosquito State [+see also:
trailer
film profile], premiering out of competition at the Venice Film Festival this weekend, is one of those films that you can describe with a simple mathematical sum, which is apt for its setting in New York’s financial centre. It is essentially The Fly + American Psycho, with Franz Kafka also a key variable. But this is a case where even a passable imitation of these touchstones proves beyond the director, and he produces a work that, like its title figure, is irritating and deserves a quick shot of kill spray.

Filip Jan Rymsza is most noted for his heroic work producing the restoration of Orson Welles’ legendary “lost” feature The Other Side of the Wind, a Venice premiere two years ago. Here he steps back into the director’s chair after two little-seen features in the 2000s, with an ambitious, sincere flick that is still inadequate and hard to recommend. Beyond the Cronenberg cribbing, a better marker for its tone would be enfant terrible Vincent Gallo’s indulgent portraits of troubled masculinity.

Mosquito State is a period drama about the very recent past. It is August 2007, and the world seems a quainter, more innocent place, but with premonitions of the fallen planet we currently inhabit. One could even see the key motif of insects as an accidental hint of a coming infectious plague. Richard Boca (Beau Knapp) is a high-flying quantitative analyst, who’s provided a lucrative model for a Wall Street company to capitalise on speculative trading. The film follows his still-hollow life after he’s given a mosquito bite in the men’s toilets that ends up having transformative consequences; still, the blocking of this sequence is more like Spider-Man than the Cronenbergian tone Rymsza is aiming for.

Beyond being set in mid-2007, it also has the gender politics and narrow-minded attitudes of some films from that time. A love interest, Lena (Charlotte Vega), is strictly ornamental, treated with none of the awe she provides for the other finance-bro protagonists. The plot hinges on Boca’s position as some kind of misunderstood genius, a prophet who saw a financial meltdown before his complacent superiors. But this, and his valuation model, is presented in such a frustratingly vague way, and has no real-world or satirical analogue with how the recession truly happened. It all makes Adam McKay’s The Big Short look like a model of sober analysis.

Adding to the chintzy-throwback feel, some ropey special effects make the film hard to take seriously. Effective set-bound production design is put against green-screen exterior effects that look scarcely real; however, it does contribute to the tone of weirdness. More successful are the renderings of plagues of flies, a correlative for Boca’s alienation from his work and self. For all his formalist brilliance, Cronenberg had a way with physical metaphors that expressed true pathos. This film’s greatest failing is its inability to coalesce its ideas, all of which are pertinent to explore from this modern vantage point. They hover, menacing but ignorable, like a fly tapping on the windscreen.

Mosquito State is a Polish production by Włodzimierz Niderhaus and Maciej Stanecki for WFDiF, and Royal Road Entertainment. 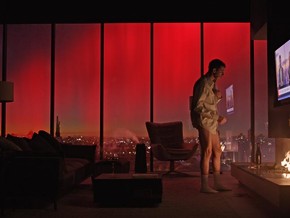