09/09/2020 - VENICE 2020: Giovanni Aloi shines a spotlight on the everyday lives of a group of terrorist-hunting soldiers in the middle of a Paris that does not quite feel like the “City of Love”

If patrolling the streets of Paris in full combat gear is all in a day’s work for you, you’re most likely part of Opération Sentinelle, with the objective to foil acts of terrorism. Premiering in the Orizzonti section of the 77th Venice International Film Festival, director Giovanni Aloi’s latest outing brings us a close-up look at the soldiers involved in what he chooses to call The Third War [+see also:
trailer
interview: Giovanni Aloi
film profile].

In effect, in the wake of the January 2015 Île-de-France/Charlie Hebdo attacks, and ramped up following the November 2015 Paris/Bataclan attacks, Opération Sentinelle involves some 10,000 soldiers with orders to protect the so-called “sensitive points” of the territory. Although about 5,000 police and gendarme representatives are also part of the operation, this differs from any regular police work. Our main trio is young Léo, straight out of military training (Berlin award winner Anthony Bajon, from The Prayer [+see also:
film review
trailer
interview: Cédric Kahn
film profile]), the rowdy Hicham, who’s done service in Mali (Karim Leklou, from The World Is Yours [+see also:
film review
trailer
interview: Romain Gavras
film profile]), and Coline, their sergeant, made all the tougher by this brazenly macho setting (the ever-watchable Leïla Bekhti, recently seen in the series The Eddy). Fully prepared, they hit the streets of a Paris devoid of any “City of Love” ambience, for yet another ordinary working day.

Or a rather extraordinary one, actually, as they’re on constant lookout for anything “sus” – their colloquialism for “suspect” or “suspicious-looking”. A bag left in the subway, a blinking device in a parked van, a shady guy with a conspicuously outdated Nokia 3310 phone – no stone must be left unturned in this edgy quest. Thankfully, and sometimes frustratingly, it’s usually a false alarm or, in the case of the Nokia guy, a matter for the police and not these soldiers. “We’re not police,” Coline has to inform a distressed, freshly pickpocketed tourist, as the unabashed thief goes on his merry way from the scene of the crime. Most “civilians” get uneasy, possibly even a bit scared (to Hicham’s delight), when they patrol the streets.

First-time feature director Aloi has done some thorough research on this alien universe that we’re both part of and simultaneously unable to examine – no wonder it makes us uneasy – and presents an impressively realistic view. The three main actors, stellar as they may be, feel very much like real service people in authentically captured Paris locations, courtesy of Martin Rit’s accomplished camerawork. The dense script by Dominique Baumard deals with several storylines, with the boisterous camaraderie between the soldiers sometimes overshadowing the more compelling daily work routines. The story of young Léo, a lonely country boy lost in the big city, shares traits with Taxi Driver and could possibly have been a film of its own – with the aforementioned Nokia phone playing a major part.

more about: The Third War

“This is not a Paris movie where people kiss in front of the Eiffel Tower, it’s Paris in war uniform”

VENICE 2020: We asked Giovanni Aloi about his Orizzonti entry The Third War, a film depicting Paris as a city frequented by fully armed soldiers ready for the real thing

The 25th edition of the International French-Language Film Festival will unspool from 2-9 October, graced by a fine selection of titles bearing the Cannes 2020 label

VENICE 2020: Giovanni Aloi shines a spotlight on the everyday lives of a group of terrorist-hunting soldiers in the middle of a Paris that does not quite feel like the “City of Love” 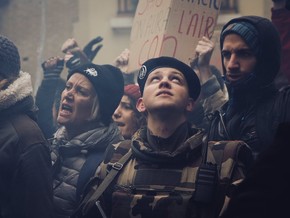