09/09/2020 - VENICE 2020: Andrei Konchalovsky continues his latter-day form with this excellent drama focusing on a popular uprising in Novocherkassk, USSR, and the ensuing massacre

“The past is never dead,” famously wrote William Faulkner; “it’s not even past.” Few films bear the weight of this statement more than Russian director Andrei Konchalovsky’s recent work, which makes war-ravaged 20th-century history as it was lived feel newly vivid.

Dear Comrades [+see also:
trailer
film profile] further refines the style of his prior successful Venice competition entry Paradise [+see also:
film review
trailer
film profile]; the two black-and-white-shot films complement each other nicely, despite their contrasting eras. Premiering earlier this week in the official Venice Film Festival competition, Dear Comrades could potentially be seen by a far broader audience than its predecessor, and spark greater recognition for Konchalovsky’s eclectic body of work. Mentored, of course, by Andrei Tarkovsky, Konchalovsky is a far more accessible storyteller, but never flinches from the utter brutality of the atrocities he re-examines.

The sense of a murky past event being re-animated is revelatory, putting the work in conversation with last year’s HBO great Chernobyl, of course derived from one of the key events in the Soviet Union’s history. Dear Comrades is set about 20 years before that, in June 1962, in the western Russian city of Novocherkassk, best known as the cultural capital of the Cossacks. The efficiency of the Soviet Union as an equalising tool is starting to show the strain, giving rise to the popular impression of an era beset by food shortages and mass institutional dysfunction. Konchalovsky’s film, set breathlessly over two days, takes in the Novocherkassk massacre itself and part of the aftermath. The taut running time of two hours races by, but we feel as if we’ve seen something monumental.

As in another Venice competition entry this year, Quo Vadis, Aïda? [+see also:
film review
trailer
film profile], he creates an effective invented female protagonist through which to focus on events. Lyuda (played by Konchalovsky’s partner, formidable actress Julia Vysotskaya) is a devout Communist Party official and a World War II veteran, sitting on the Novocherkassk city committee, which, among other things, means that she can evade the poverty and unrest affecting most of the city. Expressing fealty to the comparative strength that Stalin was able to provide to Russia, she feels alienated by what her country is becoming, compounded by her 18-year-old daughter Svetka’s (Yulia Burova) sympathy to the growing protest movement.

Stifled by the increase in production quotas, workers at the city’s main factory begin rioting, chucking rocks into the room of the regional committee. Soon after, as officials from the central committee and the KGB arrive in the region under the direction of first secretary Nikita Khrushchev, protesters in the central square are met by tanks and mysterious snipers. There are deaths and arrests, but the scale of the atrocity is vague and covered up by the officials. And Lyuda’s beloved daughter is now missing. In the similarly draining aftermath, she’s assisted in her maternal search by a sympathetic KGB officer (Vladislav Komarov), with whom she develops some romantic chemistry.

Just as she did with her role in Paradise, as a member of the Russian expat intelligentsia in occupied France, Vysotskaya brilliantly incarnates a “grey” character, to use the cliché of a black-and-white system of morals. Her unique character arc, stretching from apathy to dawning realisation, dovetails beautifully with the wider narrative.

It’s a gift that Konchalovsky was given the budget to realise this unique project, with its throwback visual style of black-and-white Academy ratio, and its utterly authentic recreation of a period he clearly remembers like the back of his hand.

VENICE 2020: Andrei Konchalovsky continues his latter-day form with this excellent drama focusing on a popular uprising in Novocherkassk, USSR, and the ensuing massacre 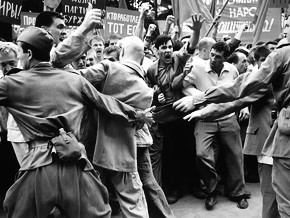 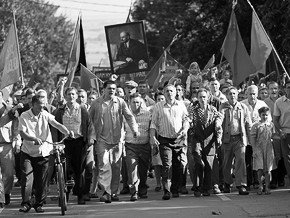