10/09/2020 - VENICE 2020: The main character in Pedro Collantes’ excellent feature debut experiences the confusion and disorientation that come as part and parcel of a step change

Macarena García in The Art of Return

In the short film Eres, shot by Vicente Villanueva in 2006, the main character appears with various people whom he talks to in different settings and situations, as each of them in turn explains how they see him, defining him, often in a totally opposite way to how someone else might view him. In the feature debut by Pedro Collantes, also a short-film director and the first Spaniard to be selected for the Biennale College Cinema class of 2019/2020, which means the flick is now being screened at the 77th Venice Film Festival, his main character, Noemí – played by Macarena García (who was seen recently in the musical Holy Camp! [+see also:
film review
trailer
interview: Javier Calvo and Javier Amb…
film profile]) – also encounters a steady stream of different individuals who define her, with varying degrees of accuracy. But the fast-paced editing of Villanueva’s work differentiates it from The Art of Return [+see also:
trailer
interview: Pedro Collantes
film profile] (the title of this feature debut) and its more sober rhythm. The movie boasts a cast including Celso Bugallo, Nacho Sánchez and Ingrid García-Jonsson.

Like an outstanding student of Éric Rohmer’s, Collantes has painted a meticulous portrait of a disorientated woman by relying on scenes of day-to-day life and free-flowing dialogue – ranging from a visit to see a sickly relative to a stroll in the park with a “fuck buddy”, also taking in a casting session. All of these moments – captured in lengthy scenes – will gradually build up all those countless layers of subtle brush strokes that define not only Noemí’s personality, but also the state of mind of this actress in the midst of a personal and professional transition.

The greatest strength of this first-time feature director lies in his blind trust in suggestion, the slightest of stimuli, the subtlest of hints and the eschewing of brashness. Collantes never overemphasises, never calls attention to anything, never overdoes it; instead, he lets that discombobulation that is unsettling this woman, who is coming home after a long time living abroad, gradually pervade the atmosphere of the film and seep into the viewer.

Because with all of these reunions with important people from her past, Noemí feels like a stranger in her own skin and begins to wonder what her real priorities are: she finds herself in that recognisable phase that is simultaneously the end of one stage and the beginning of something new, with all the giddiness that that entails. In the end, these encounters – some of them unexpected, others inspiring or cathartic – will lead her to accept the inevitable and reconsider the objectives that she had previously believed to be set in stone. And thus she will attempt to find her place, irrespective of how other people see her.

The Art of Return, with a screenplay written by the director and Daniel Remón (Out in the Open [+see also:
film review
trailer
interview: Benito Zambrano
film profile]), is a Tourmalet Films production, with distribution and international sales overseen by Filmax.

more about: The Art of Return

Interview: Pedro Collantes • Director of The Art of Return

"I wanted to depict this feeling of asynchrony"

VENICE 2020: The Art of Return is the feature debut by Pedro Collantes, who talks about the challenge of bringing his personal project to fruition on a tiny budget, in the space of a few months

VENICE 2020: The main character in Pedro Collantes’ excellent feature debut experiences the confusion and disorientation that come as part and parcel of a step change 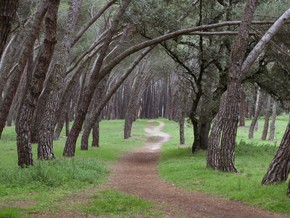