14/09/2020 - Efim Graboy brings some joy (and a much-needed high) to his respectful, if slightly familiar, film

Shown in Docaviv’s Israeli Competition, The War of Raya Sinitsina [+see also:
trailer
film profile] has a very familiar set-up: a young director, asking questions, and a war survivor, reluctant to provide all the answers. But she’s reluctant for a reason, as Efim Graboy begins his documentary with a gimmick, announcing that he is going to question his protagonist, now, and soon it’s time for a word-association game: he says, “Husband”; she says, “Forgot”. He says, “War”; she says, “Frightening”. He repeats it, again and again, finally making her explode: “I just can’t find a different word for it!” Some things you just cannot describe, or don’t even want to begin.

It’s a clunky beginning, but one that shows something that Graboy seems to be later embracing – you can come into a film with many ideas, but it’s up to your protagonist to set the pace. Mostly because Raya, already well in her nineties, doesn’t seem to be going for gimmicks at all, questioning her director’s methods any chance she gets, as well as his knowledge. “How can you make this film if you don’t know a damn thing?” she asks. But after they butt heads for a while, he begins to listen and she begins to talk, observing that she would probably fall for him if she were much younger. Although, guess what, he is not even her type.

There is a lot of joy coming from observing this unlikely friendship and the way it blossoms, culminating in them sharing a joint on a bench. But Graboy also focuses on another story here: the way war is being presented now, as some triumphant, glorious event, one to be loudly celebrated – preferably with fireworks. It seems that, for people like Raya, sometimes it’s just easier not to share some of their stories (at least those that, as she states, could give people nightmares) and join in the celebrations, nodding politely when someone is calling them “victors”. It’s an interesting situation, as Raya doesn’t really buy into this narrative, all too aware of the, yes, indescribable horrors she witnessed, yet still calls someone a “hero” later on – just because he might need it. “There is less and less truth about the war,” she says. But for the most part, she seems to be sticking to hers.

It’s true that Graboy benefits tremendously from his no-nonsense leading lady, easily irritable yet strong, struggling with the contradictions of what is being said around her and what she actually remembers, as no statue commemorating the war shows women, not having their periods until the end of it, or a schoolgirl from her memories, lying face down in the snow, her skirt rolled up. Which is why accounts like this, even if recognisable, are still crucial – crucial if we want to remember, through the noise of all these empty speeches and flowers covered in plastic, given out to the veterans, what war really was and, most importantly, what it wasn’t. Hold the fireworks, then.

The War of Raya Sinitsina was produced by Yahaly Gat and the director himself for Israel’s Muse Productions.

more about: The War of Raya Sinitsina

Efim Graboy brings some joy (and a much-needed high) to his respectful, if slightly familiar, film

The 22nd Docaviv Film Festival will take place from 3-12 September with both online and physical screenings of 120 local and international documentaries; 16 Israeli films will vie for awards 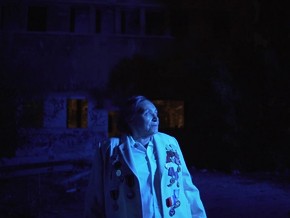