Polish filmmaker Maciej Cuske's documentary The Whale from Lorino [+see also:
trailer
film profile], which world-premiered at IDFA and has just won the Smakjam Polish Competition Prize for Best Production at Millennium Docs Against Gravity, is an epic observational, anthropological documentary about life in the titular Siberian town.

The Chukchi people of this region in the far northeast of Russia, right across the Bering Strait from Alaska, believe that mankind was born of the marriage between a primeval mother and a whale. After the opening, in which a voice-over in the native language tells us about this myth against dreamlike footage of the stormy ocean, we immediately and very viscerally get acquainted with the living conditions of Lorino’s inhabitants: in a wide shot, at least two dozen men, women and children are cleaning up a whale carcass on a sandy beach. As they are cutting the meat, they eat it raw.

Cuske alternates between images of the hard work that the adults have to do in order to survive and children trying to fit in with regular, modern-day schooling, when they would much rather play in open fields and climb on gigantic whale bones, scattered throughout the sparse grass like totems left behind after some long-forgotten ritual. A clumsy school-performance segment also reflects this discrepancy, as do the post-apocalyptic images of the fur farm, on which foxes are eating whale meat thrown on top of their iron cages. In this extended sequence, Cuske films their mud-caked muzzles in close-up as they lap at the bloody pieces hanging above their heads.

This is where the whole social commentary of the film lies. The exciting, kinetic final segment of whaling has a revolting dimension for modern viewers, despite them clearly understanding its existential necessity. Being strongly reminiscent of Vittorio De Seta's short documentaries on the epic fight between Sicilian fishermen and the unforgiving natural world in the 1950s, it makes us keenly aware of the shift in perception.

The more acutely political aspect of the Polish director's film is limited to the existence of the Lenin bust in the town's square. The first scene that we see it in depicts a surreal electronic music party, with Lorino residents of all ages, from teenagers in hoodies and with dark glasses that we'd expect at an urban rave anywhere in the world, to young mothers with small kids, to an oblivious man with a weatherworn face, all of them dancing in the semi-darkness. Already in the next, short morning segment, the square is empty, save for an old lady whom we bumped into earlier in the town store, pulling a trolley with groceries, Lenin remaining in the background with gruff indifference.

The colours of the landscape in Cuske's film fit the nature of life in Lorino: the sky and the sea are grey, and even the grass is more brown than green, while occasional flashes of red whale blood mirror the segmented dynamics of the Chukchi people's everyday existence. The amply used music score by Michal Jacaszek ranges from epic strings to an eerie electronic tingling to a melancholy piano.

The Whale from Lorino is a co-production by Warsaw-based Pokromski Studio and Telewizja Polska, which also handles the international rights.

more about: The Whale from Lorino

Acasă - My Home triumphs at Krakow

Other winners of the 60th edition of the Polish festival include Sunless Shadows, The Whale from Lorino and Self Portrait 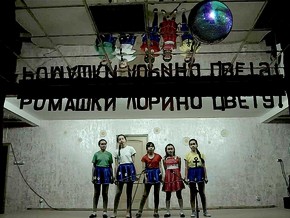 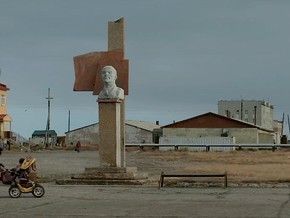 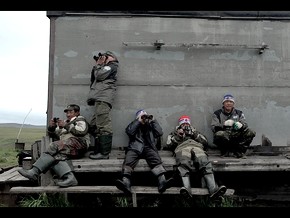 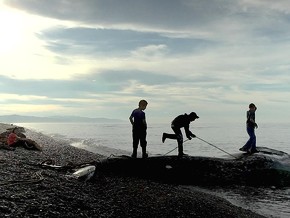