21/09/2020 - In this luminous period film, Argentinian director Pablo Agüero revives the story of a group of women who fell victim to a witch-hunt fuelled by misogyny and the persecution of freedom

Akelarre [+see also:
trailer
interview: Pablo Agüero
film profile] is not your average historical drama. Directed by Pablo Agüero, it’s in the running for the Golden Conch as part of the official selection here at the 68th San Sebastián International Film Festival. From the opening scenes, the film leaves viewers under no illusion that they are in for lingering landscape shots, sumptuous costumes or epic storytelling. This is a film about what lies beneath, exploring the psychology of everyday domestic life to send a universal message about how acts of savage violence and delirium, committed centuries ago, still echo in our own times.

The action — beautifully shot by cinematographer Javier Aguirre (The Endless Trench [+see also:
film review
trailer
interview: Aitor Arregi, Jon Garaño an…
film profile]) — unfolds in the Basque country in 1609. A judge, dispatched by the Spanish crown, apprehends a group of young women after a party in the forest. In his twisted, obstinate and suspicious mind, it is clear that this gathering was a dangerous and impure ceremony: a diabolical act. Filmed in Basque and Castilian Spanish, Akelarre follows a Kafkaesque trial devoid of fairness or justice and riddled with abuses of power, suspicion and fear — especially towards women and sex.

Agüero and co-writer Katell Guillou, drawing on the seventeenth-century work On the Inconstancy of Witches by Pierre de Lancre (also a judge), have opted for a nervy, restless editing style (courtesy of the wonderful Teresa Font) with extensive use of close-ups, as a means of adapting the story to modern expectations and dialling up the anxiety, empathy and impact. The brutal and unjust fate of these young women — just girls, in some cases — at the hands of a repressive authority incapable of tolerating liberty — represented by the sensuous sight of long hair waving freely in the breeze, first seen in the opening credits — is utterly compelling.

Ultimately, the film (shot on location) suggests that this perverse inquisition that came to northern Spain – swept away its people’s original cultural diversity, forcing them to see the world in a predetermined way and quelling them through terror. We begin to fear that, as Agüero himself points out, certain of our modern-day politicians may be operating from the same mindset, some furtively, some less so — stoking up fear as a means to seize or hold on to power.

"I steered clear of period-film clichés"

Pilar Palomero’s début feature was the winner of some of the Spanish Film Academy’s most coveted accolades, presented last Saturday at a ceremony broadcast from Malaga

In this luminous period film, Argentinian director Pablo Agüero revives the story of a group of women who fell victim to a witch-hunt fuelled by misogyny and the persecution of freedom 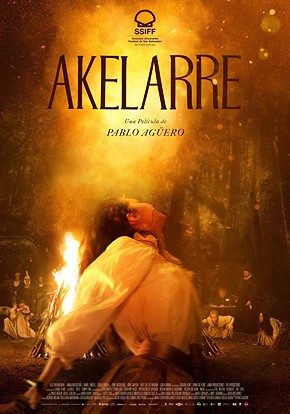