The deadpan refugee comedy, which serves as a parody on the way society looks down on immigrants, has a new entry to go alongside Aki Kaurismäki's The Other Side of Hope [+see also:
film review
trailer
Q&A: Aki Kaurismäki
film profile], and it is also one of the most incisive cinematic satires on British culture for many a year. What's remarkable is how Limbo [+see also:
trailer
interview: Ben Sharrock
film profile] director Ben Sharrock makes his points while remaining endearingly affectionate about nearly all of the characters, whether they be the refugees, the young natives or a madcap couple hosting “cultural awareness” classes. Lovingly crafted, it's easy to see how its charms seduced those handing out the Cannes Official Selection label earlier this year, before being welcomed by the Toronto International Film Festival and now finding a home in the New Directors section of the San Sebastián Film Festival.

Musician Omar is played as a quiet, thoughtful soul with a volcano erupting inside of him in an excellent leading performance of much complexity by Amir El-Masry. Omar arrives in beautiful Scotland (straight out of Local Hero) with his oud stashed like a rifle under his arm. The iconography is that of a western, but it would be a long shot to call Omar a modern-day cowboy. He is a drifter through necessity, forced from Syria by the pain of war, who is now trying to carve out his place in the world. He is a broken man. Omar's arm is in a plaster cast, so he can't play his instrument, and the restrictions on his movements are as much a plot point as Cornell Woolrich's broken leg is integral to Rear Window. And then there is his trauma…

It's a movie full of semiotics and double meanings, some more literal than others. Signs above community centres and on supermarket notice boards are amusing and heart-breaking, often at the same time. At times, it is laugh-out-loud funny while making salient political points. It's as much a satire on British attitudes as it is a story of lost souls. The “cultural awareness” classes hosted by Helga and Boris (Sidse Babett-Knudsen and Kenneth Collard, both excellent), in which they teach courting etiquette and how to apply for a job to the band of “misfits”, including Omar's new flatmates Farhad (Vikash Bhai), Wasef (Ola Orebiyi) and Abedi (Kwabena Ansah), are some of the best scenes in British film for many a year. The classes also work, should one desire, as takedowns of the racist stereotyping of male refugees as leeches, rapists and benefit fraudsters.

The supporting cast have their own quirks that make them human and show how they're already in touch with Western music, sport and entertainment. Farhad loves Freddie Mercury, a musician whose Indian heritage and homosexuality were glossed over at the height of his fame. Wasef and Abedi argue over football and Friends. Limbo is so unique that it feels churlish to mention that it's slightly less successful when it's not disguising the pathos, but even then, the rough seas look like a Constable painting.

Sharrock's first film, Pikadero [+see also:
film review
trailer
interview: Ben Sharrock
film profile], made on a micro-budget, was a Basque-language tale of love in troubled economic times that won prizes at San Sebastián and the Michael Powell Award for Best British Feature Film in 2016. Limbo is confirmation that he's more than just a directing talent: he's the real deal, who can take a Ken Loach-esque subject matter and tell it like a Coen brothers comedy.

Limbo, an entirely UK production staged by Caravan Cinema, is a Film4, Screen Scotland and BFI presentation. Its international sales are overseen by Protagonist Pictures.

“I started to question the dehumanising representations of refugees” 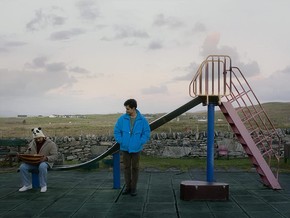