Pepón Nieto and Carmen Machi in An Optical Illusion

Among its myriad sections, the 68th San Sebastián International Film Festival harbours the odd surprise that can easily catch the audience off guard. For instance, someone may decide to go and watch a film selected in Zabaltegi-Tabakalera starring famous comedienne Carmen Machi and similarly popular actor Pepón Nieto, but they may not have noticed who is directing proceedings. In this case, it’s none other than the one and only, the inimitable Juan Cavestany, a director and playwright who refuses to abide by the obligations of the film industry when it comes to writing and directing feature films. We only need recall our bewilderment while watching titles of his such as People in Places [+see also:
trailer
film profile] or Dispongo de barcos [+see also:
trailer
film profile]. His new escapade is called An Optical Illusion [+see also:
trailer
interview: Juan Cavestany
film profile] and is equally baffling, without neglecting to also be surprising and entertaining.

One could see this new film as something akin to the Burgos-based cousin of the works of Charlie Kaufman and Spike Jonze because, much like those US directors, Cavestany eschews mainstream narratives and dares to break the mould, go out on a limb and befuddle the audience. Here, the premise would appear straightforward, at first glance: a married couple – whose daughter has gone to another city to study – decide to break the routine and fly to New York from their pad in the Spanish countryside. But when Alfredo and Teresa get to the Big Apple, they start to pick up strange signs that make them wonder whether they are really there or whether they are in fact somewhere else...

With omnipresent music – as if trapped inside some demented lift – which shifts effortlessly from terrifying to a fairground vibe, An Optical Illusion draws a great deal of its inspiration from the TV series The Twilight Zone, which Cavestany indulged in as a child, and from the films of David Lynch, which he sampled as an adult. Not everything in An Optical Illusion has to make sense – nor does it have to in real life (just go for a stroll in the street and you’ll agree).

In amongst the folds of this brand of half-surrealistic, half-absurd humour, the filmmaker sneaks in more serious subject matter and rails against the aesthetic uniformity of today’s cities, pays tribute to New York, which he became very familiar with while living there for several years, captures the realities of empty-nest syndrome, uses the title of the movie as a nod to cinema, and holds up a cruel mirror by reminding us that, every time we travel, we become the protagonists of a kind of film that almost never adheres to the instructions of the script that we’d previously drawn up (as happens in real life as well, for that matter).

more about: An Optical Illusion

"Reality has lived up to my films" 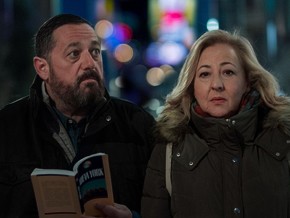