24/09/2020 - Love, and some bitterness, on the road with Stanley Tucci and Colin Firth leads to a rather bumpy destination in Harry Macqueen’s film

The sleeping arrangements are important in Supernova [+see also:
trailer
interview: Harry Macqueen
film profile], which is unspooling in competition at the San Sebastián Film Festival. British director Harry Macqueen's second film stars Stanley Tucci and Colin Firth as an ageing gay couple. It opens with a seemingly innocuous and simple shot of Tucci's writer Tusker in a womb pose in bed, being warmly embraced and enveloped by Firth's concert pianist Sam. It's no accident that they're positioned this way, for the next stretch of the movie lives out this pose in their relationship dynamic.

With Sam taking the wheel of a camper van, driving Tusker along Britain's country lanes with their dog in tow, it will become apparent that Sam has been mollycoddling Tusker a great deal. Mostly, this cosseting has been out of necessity, as Tusker has early-onset dementia. Sam never knows when Tusker will head off and get lost, stand in front of cars or have a moment where he forgets himself.

Every time the couple sleeps, whether it's in the van or at Sam's sister's house in the country, the positions that Sam and Tusker take in their various beds will indicate the state of their relationship. It's a signal of whether they are having a tiff, feel distanced or are being selfish.

Macqueen's 2014 directorial debut, Hinterland [+see also:
trailer
film profile], was a two-hander about love on Britain's roads, and Supernova works best when it follows this formula. The performances from Tucci and Firth are delicate as secrets surface, schisms widen and they voice their desires to take different forks on the road. Macqueen uses audience familiarity with the actors to reinforce the feeling that this is a couple who have spent a lot of time together. They play to their perceived strengths, Firth as the carer and Tucci as the catty observer, and even the fact that they have appeared in films together (Gambit and Conspiracy) creates immediate empathy for them.

The performances are supported by some beautiful cinematography from veteran DoP Dick Pope, who shoots the trees and hills like they are the deserts of Arizona. It's a rare film that convinces as a road movie on the small-island roads of England, but this is one of them. The desire to pay tribute to the predominantly American genre even extends to the couple having a roadside break in the delightfully named Cafe Sixty-Six.

However, this is a car journey which will lose its way and hit a traffic jam as big end-of-life themes get introduced and more characters enter the fray. As soon as Sam and Tusker have scenes without each other, the story implodes. Having set the tempo for an enjoyable two-hander, Macqueen then moves up too many gears at a time. Inevitably, it judders. The metaphors become more obvious, with a map of the sky on a ceiling as they sleep and an explanation set out to a young child at a very British party about the workings of supernovas and how everyone is stardust.

But unfortunately, not every film is. The prominent thematic reveals occur in very movie-like ways: the reading of a diary; the recording of thoughts and feelings on tapes; and speeches at dinner tables. It's a shame because the conversations should be more interesting, as they deal with science versus the spiritual, coping without partners and how we spend our final days; however, they surface through a clumsy dispute-and-resolution plot. There is also an ending open to interpretation, which feels like a cop-out because it's a failure to make good or even just explore the characters' wishes.

Supernova is a UK production staged by Quiddity Films, The Bureau, the BBC and the BFI. Its international sales have been entrusted to The Bureau.

We met up with Harry Macqueen to talk about his new film, Supernova, starring Stanley Tucci and Colin Firth as ageing lovers on a road trip

Love, and some bitterness, on the road with Stanley Tucci and Colin Firth leads to a rather bumpy destination in Harry Macqueen’s film 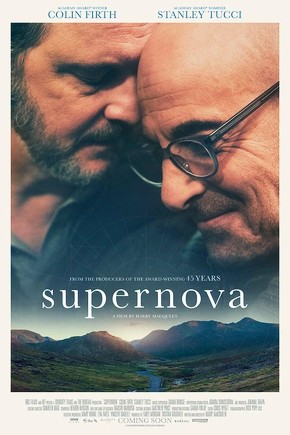 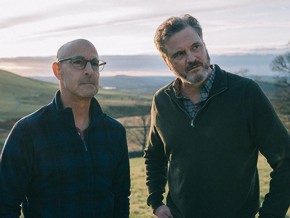