08/10/2020 - Steve McQueen’s new effort is a stunning depiction of police brutality in Britain, highlighting the problem of institutionalised racism

Initially slated for Cannes, and now opening the London Film Festival, Mangrove [+see also:
trailer
film profile] is Steve McQueen's best film (and that's saying something). The shadow of the Grenfell Tower fire looms large over his magnificent account of the Mangrove Nine, who were a group of black citizens tried for "riot and affray" following a protest about police brutality that took place on 9 August 1970 in North Kensington, a slum area popular with Windrush-generation arrivals. The landmark case was the first judicial acknowledgement of behaviour motivated by racial hatred within the Metropolitan Police.

In the depiction of the streets, which includes period clothing and cars, and is mostly historically accurate, a half-built tower on the Lancaster West Estate can often be seen in the background. Construction on Grenfell Tower actually started in 1972, but the glimpses of the half-built skyscraper in the distance are a constant reminder that the problems of state oppression of minorities are as prevalent today as they were in the period depicted in this incredible film, when the zone was a designated slum clearance area with new social housing and the Westway dual carriageway was built.

Mangrove is an inspiring account of how the black community, through grit, determination, decency and wiles, have always had to fight to establish a foothold in England, a country desperate for Commonwealth citizens to arrive and do menial jobs after World War II, with those immigrant adventurers met with racism and police brutality.

McQueen starts with Frank Crichlow (Shaun Parkes) opening the Mangrove restaurant in 1968. Its servings of spicy West Indian food make it a popular spot for the black community, but also a target for racist police constable Pulley (Sam Spruell), who leads a series of relentless police raids aimed at disrupting the business and intimidating those who run the place. One scene ends with a colander rocking on the kitchen floor, with McQueen holding the shot long enough for contemplation and the breather that the audience needs, but which the protagonists are not afforded.

Following these raids, it's decided to hold a protest, where several protagonists lovingly introduced by McQueen through their home life, activism, in the pub or at the Mangrove come together. The performances are uniformly great, but really standing out amongst the Mangrove Nine are Letitia Wright, playing Black Panther activist Altheia Jones-LeCointe, and Malachi Kirby as the intellectual and political commentator Darcus Howe. The police attack the marchers, yet the protestors are the ones facing charges. The restaurant and street scenes are evocatively realised through Shabier Kirchner’s stunning 35 mm cinematography and supported by Mica Levi's score.

The use of photographs from the time and the courtroom scenes providing a takedown of institutional structures that often result in prejudice-related injustice reminds us of Alan Clarke's To Encourage the Others (1972). Judge Edward Clarke, played by Alex Jennings, is a stubborn character seemingly intent on cajoling the jury into supporting the prosecution.

This is the first time that McQueen has made a feature about black British life, and the good news, given this high standard, is that four more are coming out in 2020. Mangrove is one of five films made by the BBC and Amazon under the “Small Axe” moniker, and they will look at profound moments from black British history. Another, Lover’s Rock, was also selected for Cannes and will play in London. If they are half as good as Mangrove, McQueen will be the chronicler to British life that Spike Lee is to America. Cheese on bread!

Steve McQueen, for his British Lammas Park outfit, and Tracey Scoffield and David Tanner, of the UK’s Turbine Studios, executive-produced Mangrove along with Lucy Richer for BBC One and Rose Garnett for BBC Films. Amazon Studios co-produced it in the USA. BBC Worldwide is in charge of its international sales.

Steve McQueen’s new effort is a stunning depiction of police brutality in Britain, highlighting the problem of institutionalised racism 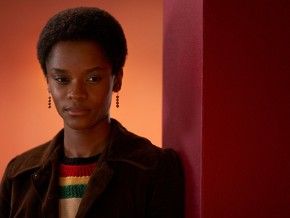