12/10/2020 - Péter Bergendy tries his hand at the historical horror film, but while his ghosts are a success from a special effects perspective, they are much less convincing narratively

The bag-masks worn by a few inhabitants following the wave of Spanish Flu in 1918 which hit the village where the action of Hungarian director Péter Bergendy’s Post Mortem [+see also:
trailer
film profile] takes place make an undeniable impact. The film, which had its world premiere in the international competition of the 36th Warsaw Film Festival, adventures into the horror of ghosts forever stuck in limbo. But beside this striking premonition from the director (who shot the film end of 2018, beginning of 2019) which has an incredible echo with the current context of the coronavirus pandemic, his incursion into the fantastic genre does not deliver on the promises of its sensational opening.

On the battlefield, Tomás (Viktor Klem), considered dead following an artillery explosion, is thrown into the mass grave, but a man notices that he is still breathing among the pile of cadavres and at the last minute takes him out of the kingdom of the dead where the soldier, passed out from the explosion blast, had the strange vision of a young woman calling him and bringing him back to life. Six months later, Tomás has become a very special photographer who offers grieving families the chance to keep a trace of their departed loved ones by putting together family scenes where the living and the dead (made up and propped up) are side by side. One day, Tomás sees his hallucination come to life in the person of Anna (Fruzsina Hais), an orphan of about 10 that he will follow to her village where the frozen ground prevents the burial of the many victims of the Spanish flu. The photographer gets to work, housed by schoolteacher Marcsa (Judit Schell), but a very heavy and paranoid atmosphere hangs in the air, “in these terrible times where there are more dead people than alive, where the Earth is invaded by ghosts…” Tomás and Anna decide to investigate the borders of the beyond, but things soon escalate and the dangers quickly grow bigger and bigger…

Barking dogs, muted moans coming from nowhere, malignant shadows, scary attics and barns, wet walls, invisible aggressions, doubles, attacks devious or on a large scale, techniques for testing the presence of ghosts (ropes, bells, flour on the floor, paths lit up with torches, photographic plates, phonographs, etc.): the film explores the whole panoply of the tropes of the genre. Unfortunately, while the special effects are up to expectations (especially with a spectacular finale), the narrative progression is rather laborious, repetitive and confused, and the scenes of anguish and horror often turn to the comical and ludicrous. Which is a shame, because Post Mortem is based on interesting historical material and features many solid assets such as András Nagy as director of photography, Gábor Balász as sound designer and Attila Pacsay doing the score. But if someone wants to successfully “torment with curiosity and fear” on the big screen, one must know how to really scare, or one risks making people laugh…

Review: As Far as I Know

In their debut feature, Nándor Lőrincz and Bálint Nagy examine the influence of a rape and the ensuing trauma on the lives of, and relationship dynamics between, a yuppie couple

The filmmaker's first feature, starring Ákos Orosz and Mari Nagy, will be presented at Connecting Cottbus's Work in Progress. A production by Filmfabriq and FP Films sold by the NFI World Sales

The biggest Italian sci-fi event will unspool between 29 October and 3 November, both in Trieste and online, showcasing Archive, Mortal, Skylin3s and the series SF8

Péter Bergendy tries his hand at the historical horror film, but while his ghosts are a success from a special effects perspective, they are much less convincing narratively

The filmmaker gets to work on a ghost film set in Post-World War Hungary. A Szupermodern Studio Budapest production sold by HNFF 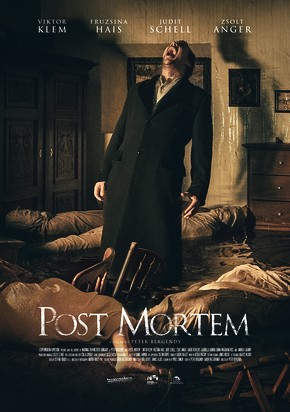