20/10/2020 - Swedish director Ronnie Sandahl’s new film is an enthralling exploration of the darker side of professional football, telling the true story of Martin Bengtsson’s experience at Inter Milan

Martin is a 16-year-old Swedish boy who dreams of becoming a footballer. His dream begins to come true when he’s scouted and acquired by a big Italian club. But, as he exchanges Sweden for Italy, his dream turns into a veritable nightmare. This is the true story of Martin Bengtsson, now 34, which Swedish screenwriter and journalist Ronnie Sandahl (Underdog [+see also:
film review
trailer
interview: Ronnie Sandahl
film profile]) is bringing to the big screen in his second film as a director, Tigers [+see also:
trailer
film profile]. Having taken its first bow at the Busan Film Festival, the film was subsequently presented in the 15th Rome Film Fest’s Official Selection, in collaboration with Alice nella Città.

The second chapter in a trilogy on sport scripted by the director himself, which began with Borg McEnroe [+see also:
film review
trailer
film profile] and will end with Perfect, set to revolve around American gymnast Kerri Strug, Tigers is an enthralling immersion into the darker side of professional football which explores Bengtsson experience at Inter Milan, as recounted in his autobiography “In the Shadow of San Siro”, which caused quite a stir upon its release in 2007. It’s the story of a teenager who sinks into depression and ends up attempting suicide in pursuit of his dream to become a Serie A footballer.

His malaise is palpable from the outset, when Martin (Erik Enge) first sets foot in the Milan-based residence for Inter’s new signings. He doesn’t understand a word of Italian and his team-mates mock him and refuse to pass him the ball on the pitch. “You must have cost a lot if everyone here hates you already”, jokes goalkeeper Ryan (Alfred Enoch) who’s the only one who speaks English and is willing to be his friend. The monetary value of these boys is a constant feature in their conversations (“I’m worth 500 thousand euros, he’s not worth a cheeseburger”, boasts one player in reference to a team mate who’s just been dropped from the team) and it’s quickly made clear to Martin that he needs to think big: with his first pay cheque, he should buy himself an expensive sports car, not a guitar, regardless of whether he’s old enough to drive it.

The competition amongst these budding players to get into Inter’s A team and thereby make their Serie A debut is fierce to say the least. Every match is an audition and each of them must focus solely on stealing the limelight. Martin has some great qualities, but he’s also emotionally fragile with huge affective needs. Discipline is strict, both on and off the pitch, and distractions are not permitted. These promising young players are like caged tigers, bullying is an everyday thing, and when Martin starts to go out with Vibeke (Frida Gustavsson) who’s Swedish like him and has moved to Milan for a modelling career, he finds himself faced with a raft of new problems. To become a champion, you have to sacrifice everything, and Martin really wants to make it, firstly to show his father how much he’s worth, but also because if he doesn’t give 110%, the club officials (including a frosty Maurizio Lombardi) won’t think twice about selling him on to the highest bidder.

The constant psychological stress which Martin labours under is wonderfully conveyed by the actor portraying him - who expertly juggles vulnerability and restlessness - but also by the particular way in which Sandahl uses the camera, continually pointing his lens on Martin, especially in action sequences on the pitch, and often filming him close-up. The film raises a very thorny question: that of the mental health of young footballers who can, at times, be little more than children, but who are nonetheless exposed to extreme levels of pressure. It’s another side of the coin that’s worth discovering, an issue that’s very well portrayed here and which clubs have demonstrated greater sensitivity towards in recent years, offering psychological support to its wards as a direct result of Bengtsson’s revelations.

Tigers is a co-production between Sweden (Spark Film and TV), Italy (Art of Panic) and Denmark (SF Studios), with international sales entrusted to Wild Bunch.

Swedish director Ronnie Sandahl’s new film is an enthralling exploration of the darker side of professional football, telling the true story of Martin Bengtsson’s experience at Inter Milan 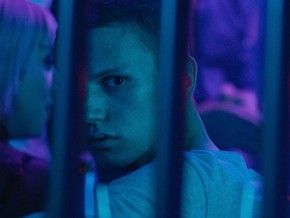