12/11/2020 - Gaël Lépingle retraces through fiction the first 24 hours, in survival mode, of five childhood friends stuck inside a closed perimeter established after a nuclear incident

“When you grow up at the foot of a nuclear plant, you know it can happen, right?” The subject of the nuclear incident has already inspired cinematic fiction, notably from a journalistic investigation angle (The China Syndrome by James Bridges), from the point of view of precarious workers (Grand Central [+see also:
film review
trailer
interview: Rebecca Zlotowski
film profile] by Rebecca Zlotowski) or from that of the aftermath (Hiroshima mon amour by Alain Resnais, The Land of Hope by Sion Sono, Land of Oblivion [+see also:
trailer
film profile] by Michale Boganim), but it’s an immediate approach, on the level of young inhabitants living nearby, that French filmmaker Gaël Lépingle has favoured in Atomic Summer, presented as a European premiere at the 17th Seville European Film Festival, in the competitive section Extraordinary Stories - Special Screen. A bias that the director – who comes from documentaries and made his debut in fiction with The Times of the Pirates [+see also:
trailer
film profile] (Grand Prize at FID  Marseille 2018) – employs with intelligence in a clever economy of means that doesn’t exclude a great wealth of information and a survival film kind of suspense.

When Victor (Shaïn Boumédin), jogging in the vast desert expanses of the countryside around the nuclear plant of Nogent-sur-Seine, ends up taking off the earplugs that isolate him from the outside world and hears the alarm siren resounding in the surroundings, he doesn’t yet know that he is at a crucial crossroads in his young life. Bumping into his childhood friends Djamila (Carmen Kassovitz), Louis (Théo Augier), Cédric (Constantin Vidal) and Tiffany (Manon Valentin) whose car has broken down, he quickly understands that they won’t manage to join the hoard of evacuees and the fleeing populations by foot, and that it would be safer to hide in a farm abandoned by its inhabitants. On TV, experts and journalists succeed each other, and tension rises behind closed doors while the truth about the incident slowly reveals itself. Each of the five characters reacts to it emotionally in their own way, taking both wise and inconsiderate decisions.

By examining with a magnifying glass the first 24 hours of what soon becomes a level 5 nuclear alert, Gaël Lépingle describes with great precision, through the empirical reactions of the characters (who cobble together protections against radiations and use a mobile phone as a Geiger counter), the reality of such an event at a human level, all while painting in relief what young people’s life is like in the provinces of the deep countryside. From denial to acceptance, from individualism to solidarity to selfishness, from fear and waiting to limited action, the film offers, with an effective minimalism, a very complete overview, at once documentary-like and romantic, of an extraordinary situation, in the shadow of the menacing white smoke coming from the two tall cheminess of the power plant.

Pio Marmaï, Mélanie Laurent and Carmen Kassovitz are all starring in Ride Above

The first clapperboard is set to slam in March on Christian Duguay’s new film, a Nolita Cinema production sold by TF1 Studio

Gaël Lépingle retraces through fiction the first 24 hours, in survival mode, of five childhood friends stuck inside a closed perimeter established after a nuclear incident 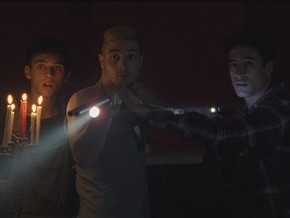