20/11/2020 - Recipient of a 2020 Cannes label and carried by excellent performances, Naël Marandin’s accomplished second feature is a story of domination among the economic challenges of animal farming

"Young people with ambition and ideas, that’s exactly what our region needs, you can count on my support." When your family farm is going into administration and close to being sold, when the market prices of animals keep going down and strangling you, and when your project for getting back on your feet must get the green light of the Safer (Land Development and Rural Establishment Companies) through a preemption within the framework of support for young farmers, every extended hand should be welcome. But people in weak positions sometimes awaken the appetite of ill-intentioned individuals, especially if you happen to be a beautiful young woman working in a very macho environment.

This is the starting point of Beasts [+see also:
trailer
film profile], the second feature from Naël Marandin (after She walks [+see also:
trailer
film profile] in 2016), recipient of the 2020 Critics’ Week label of the 2020 Cannes Film Festival, and having its european premiere in competition at the 24th Tallinn Black Nights International Film Festival. An accomplished film, both in its original layering of two topics that have often been in the news these past few years (economic difficulties in the agricultural world, and abuses of power as the means to sexual assault), and for its very realistic, alsmost documentary-like approach, credibly complimented by the cast within a dramatic but perfectly controlled story.

The mooing and the delivery of cows: in the local auctioning arena (“Lot n.2, six-year-old cow, IBR certified, vaccinated more than 60 days ago, 776 kilos, starting price: €1,230”), Constance (the impressive Diane Rouxel) is faced with the implacable reality of the market. The breeding farm she controls with her father Bernard (Olivier Gourmet) and her future husband Bruno (Finnegan Oldfield) cannot survive in its current form, and already a few “vulture” neighbours are circling it, waiting for her bankruptcy. But the young woman has a plan for the future: “to produce what we need to feed our animals, work in a more environment-friendly way and sell our products directly so as not to give away our profits to the big distributors.” A project which requires the green light from the administration counsel of the organisation regulating rural land in the sector. The owner of the marketplace Sylvain Rousseau (Jalil Lespert) heads the organisation and suggests to Constance that her dream might come true. But as his wife, the local vet, herself says about him, when this forty-something family man “sets his mind on something, not many people can stop him” and his interest soon reveals itself to go far beyond a professional work relation. Constance soon finds herself trapped, the silent victim to a manipulating pervert…

Very well informed about the conflicts in the world of animal farmers (manoeuvres to seize union power, strategies of modernisation or expansion) and about the everyday difficulties of the job, Beasts unfolds with an excellent script (written by Naël Marandin together with Marion Doussot and Marion Desseigne-Ravel), a dynamic mise-en-scene and a beautiful, very organic cinematography by Noé Bach. Solid on every level, the film makes no mistakes in terms of rhythm, in the vein of fascinating social realist cinema and following in the footsteps of a female heroine facing the dark forces of male domination ("this isn’t a world for you, can’t you see that?", "it will be your word against his"), but who won’t give up without a fight.

Produced by Diligence Films, Beasts was co-produced by France 3 Cinéma and K’ien Productions. The release in French cinemas will be handled by Ad Vitam on 3 February 2021 and international sales are handled by Kinology.

Recipient of a 2020 Cannes label and carried by excellent performances, Naël Marandin’s accomplished second feature is a story of domination among the economic challenges of animal farming 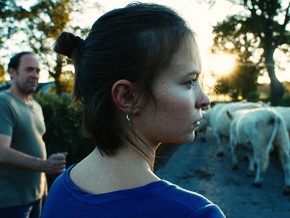