Review: In the Shadows

14/12/2020 - In his dystopian tale, Erdem Tepegöz explores a carefully constructed world of decay and corrosion

Numan Acar in In the Shadows

Shown in the Feature Film Competition of the 30th FilmFestival Cottbus despite – or was it because of? – its sci-fi flavour, Erdem Tepegöz's In the Shadows takes the cinematic rule that nothing good happens in derelict mines, ever, and proves it right once again. Controlled by a faceless surveillance system, a group of empty-eyed people obey orders delivered by a muffled voice from a box, telling them to “go back to their machines”. Just as they have been doing for years, until one of them (Numan Acar, of Homeland fame) starts getting increasingly suspicious after spotting an error or two in the infrastructure that was supposed to be infallible. According to another cinematic rule, once you start questioning things, there is no going back. Certainly not back to your machine.

Love for Terry Gilliam oozes from every rusty pipe here, and that's even before Acar's Zait encounters the mysterious “Repairman” (who actually looks a bit like Gilliam himself when he was cameoing in Jupiter Ascending). This does take away some of the originality, but for the clearly limited budget, it's still a carefully constructed world that Tepegöz chooses to explore, one of decay and corrosion, and endless tangled-up cables and wires – more often than not leading nowhere, as Zait discovers.

Acar, boasting the most spectacular head of hair out of all of the cast members, plays it all down, even when a skin disease begins to attack his character's body – everyone's biggest nightmare, as a health check can result in immediate dismissal. It's fitting, as none of these exhausted people, including one guy who seems like a Turkish answer to Mouse from The Matrix, really talks about anything here, with the creaky sounds of the mine immediately overpowering any dialogue as well as a growing obsession. They lead a terrible, hopeless existence, and even one horse shown here is predictably skinny. But regardless of that, they still wake up every day and repeat it all, without asking why or for whom, which turns it into more of a philosophical parable.

Still, In the Shadows could use more of an actual story, as there are only so many shots of run-down buildings that one can take in a single sitting. When Zait finally loses his patience and proceeds to shake up his companion, begging him to “say something concrete!”, he might just as well be speaking for his audience – already worried to death about that skinny horse, by the way. But the whole thing certainly makes you want to question things afterwards, all of them really. And follow some suspicious-looking wires, even in your own home.

In the Shadows was produced by Turkey’s Contact Film Works.

more about: In the Shadows

Review: In the Shadows

In his dystopian tale, Erdem Tepegöz explores a carefully constructed world of decay and corrosion 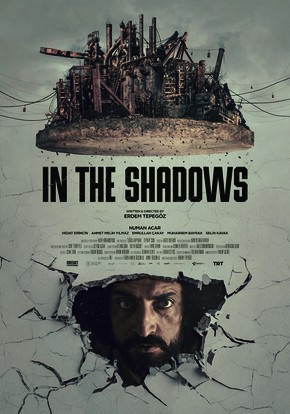 The actors’ agent has taken his first turn behind the camera with a family drama recently unveiled at the 11th D’A Film Festival in Barcelona
Nikolay Mutafchiev • Producer, PREMIERstudio