Amelia Crouch and Alistair Petrie in Eight for Silver

The curse of the werewolf strikes again in Sean Ellis's Sundance entry Eight for Silver – shown in the Premieres section – as no matter how hard they try, people rarely get that one right. Set in the 19th century, with a dynamic World War I prologue that introduces a silver bullet of some mysterious origin plucked out of a soldier's limp body, it sees a generally unpleasant land baron (Alistair Petrie) deciding to hire mercenaries to get rid of a Roma clan which is causing him trouble – one that dabbles in mysticism yet, oddly enough, fails to see what is coming. Soon enough, everyone in the neighbourhood is plagued by horrific nightmares as a result, not to mention a bloodthirsty creature that’s a bit too fond of the concept of evening snacks.

Wrapped up in a pleasant enough retro getup, it's the type of film that gets described as “atmospheric” a lot, mostly because you can't really see that much through the fog. But ultimately, those are the very moments to cherish, as once things finally come into full view, they underwhelm, with innocent townsfolk facing – and this could possibly be viewed as a spoiler – what appears to be an exceptionally buff CGI Gollum.

It's a pity, yet it really sums up the whole thing: Eight for Silver, with its terribly solemn protagonists, dark colours and quite a few severed limbs flying around the place, like in another Monty Python hospital sketch, seems torn between unapologetic trash and a desire for something a bit more respectable. A tale of the crimes committed by those in power, coming back to haunt them in different shapes and forms, could have some depth to it, and there is more to its monsters than meets the eye. But, and this is a problem, especially given the running time, there is nobody to follow or even care for a little – not Kelly Reilly's unhappy wife, not her kids, and certainly not a visiting pathologist played by Boyd Holbrook, so bland it's a wonder anyone asks him for any advice at all. There is always some pleasure to be derived from feeling superior to horror characters, but this time, it's almost too easy, as most of the action revolves around a cursed field that everyone keeps coming back to as if looking for kicks.

The gruesome deaths provide a welcome distraction, although no one will ever want to see another scarecrow again after this. And yet, for all the violence, there is barely anything happening here. Pretty to look at, as this can't be denied, Ellis's film ends up running around in circles, repeating the same dream sequences up to the point where everyone should just wake the hell up already. Still, once they do, they head straight to that field. There is no winning here.

Eight for Silver, written by Sean Ellis, is a US-French co-production staged by Liddell Entertainment.

more about: Eight for Silver

Shooting has kicked off in Rome on Amanda Sthers’ Promises

Pierfrancesco Favino and Kelly Reilly lead the cast of this film, which the French director and writer has adapted from her own international bestseller 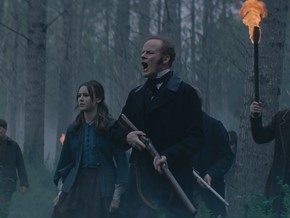