Young Georgian director Salomé Jashi is by no means a stranger to international festivals: one of her earliest works Bakhmaro, a surreal journey of sorts within the walls of a dilapidated but decidedly colourful housing complex in a small town in the provinces of Georgia, won a Young Talent Special Mention in DOK Leipzig’s documentaries category in 2011, while The Dazzling Light Of Sunset [+see also:
film review
trailer
film profile], an unforgiving portrait of modern-day Georgian society which veered between humour and gritty realism, was awarded the Sesterce d’Argent within the Regard Neuf section of the 2016 Visions du Réel Festival. Her latest documentary, meanwhile, Taming the Garden [+see also:
trailer
interview: Salomé Jashi
film profile], has been selected for the World Cinema Documentary competition unfolding in this year’s Sundance Film Festival.

Taming the Garden sees Salomé Jashi continuing her journey through the bowels of her native Georgia. But this time, it’s not the country’s inhabitants who are called to testify, but nature itself, the symbol of a people from secular history who are at risk of disappearing. The film is a visual poem in which the rivalry between nature and humankind undoubtedly escalates, becoming an unevenly matched battle where hope gives way to dismay.

A seemingly “anonymous” yet powerful man has developed an obsessive passion for the centuries-old trees which have become natural monuments in his country over the years. What he wants is to possess them, to collect them and to transform them into obedient slaves submitted to his will. His Machiavellian plan consists of buying these behemoths - some of which are as tall as fifteen-storey buildings - from communities inhabiting the Georgian coast, digging them up and planting them in his own private garden. In order to bring his surreal mission to a happy conclusion, these trees are quite literally uprooted from their natural habitat, ripped from the ground and transformed into soulless, tradable commodities. The landscape which enveloped them and the locals who had admired and revered them for generations are forced to learn to live without them, deprived of a natural legacy which, although by no means a source of wealth, nonetheless allowed them to feel special and privileged. Casting a dazzlingly beautiful, poetic gaze, Taming the Garden follows this forced journey towards an unknown future; it accompanies the imposed migration of these dumbfounded living things which are subject, in spite of themselves, to the whims of capitalism. Faithful to the aesthetic characterising all of her works, Salomé Jashi paints a cruel yet captivating portrait of contemporary Georgian society, a portrait where centuries-old trees embody the needs and values of an entire society. They are the lifeblood sustaining the story of a dismayed people, over and above the economic differences and political conflicts that come and go. Uprooted from their land, the protagonists of Taming the Garden rise and fall without drowning, adapting to a new home/prison which isn’t of their choosing but which they must learn to master if they wish to survive.

more about: Taming the Garden

We spoke to Georgian director about her poetic film, which documents the incredible journey undertaken by some centuries-old trees

Between 24 November and 5 December, the festival will be taking us down some intriguing paths, with the jury’s deliberations open to the public and a tightly curated selection of documentaries

From 12-19 November, Bilbao will play host to this storied international rendezvous for documentary and short films

The films by Julia Ducournau, Jasmila Žbanić and Florian Zeller receive four nods, while Paolo Sorrentino’s The Hand of God and Juho Kuosmanen’s Compartment No. 6 follow hot on their heels with three

The Golden Apricot Festival wraps its 18th edition with wins for Pebbles, Downstream to Kinshasa and Taming the Garden

MajorDocs continues to slow down the pace with its third edition

From 5-9 October, Majorca will become a paradise for creative documentaries, with screenings, meetings and other activities organised around non-fiction film 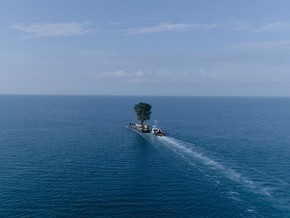