04/02/2021 - Centring on a mother and daughter scraping by in the midst of the crisis, the feature debut by artist Amalia Ulman is brimming with freshness, levity and a sense of humour

Amalia Ulman is a multidisciplinary artist of Argentinian heritage who lived for many years in Spain, where she grew up. She now resides in the United States and has made the leap to cinema with El planeta [+see also:
interview: Amalia Ulman
film profile], a supremely independent film that world-premiered last weekend in the World Cinema Dramatic Competition of the 2021 Sundance Film Festival. Putting her fine sense of humour to good use, the 31-year-old helmer has filled it with some of her own experiences and many of her anxieties, and has built up quite an accurate portrait of how the crisis has affected the inhabitants of Gijón, the northern Spanish city where the action unfolds, depicted in black and white by Carlos Rigo Bellver, à la Woody Allen (who was crowned with the Prince of Asturias Award for the Arts in 2002 in the neighbouring city of Oviedo) in Manhattan.

But here, the protagonist is not a short-sighted Jewish man who is going out with a much younger woman; rather, the leads are a mother and daughter (played skilfully by the director/screenwriter/producer herself and her mum, Ale Ulman) who, in the wake of a dramatic event, scrape by as best they can, a bit like two dethroned princesses, in surroundings that offer no easy way out. To achieve this, they both turn to small-time crime, petty theft and, more than anything else, wishful thinking in order to escape this reality that, sooner or later, will end up bulldozing them into the ground. And Amalia Ulman makes sure she narrates the tale with freshness, tenderness and, above all, a sense of (dark) humour, as she knows only too well what she’s talking about: she endured those financial hardships herself and, like the main character in the film, she was the victim of a road accident that severely affected the use of her lower limbs.

And so, with an utterly free spirit and the collaboration of several friends of hers, such as Nacho Vigalondo (the director of Colossal [+see also:
film review
trailer
interview: Nacho Vigalondo
film profile], who pops up in a highly entertaining scene, which calls into question what it can actually end up costing just to buy a book), El planeta gradually adds more and more brush strokes to its characters’ personalities, the disastrous dates that the daughter goes on and her mother’s delusions of grandeur. At times, they function like friends, at others like a married couple.

Some simple locations (reflecting the fact that Gijón has become a city of empty business premises and an ageing population, with barely any youngsters left), a skeleton crew and some natural dialogue bring this feature debut into close alignment with the early films of Jim Jarmusch and that whole vein of US indie cinema that just so happened to find its niche at Sundance. That’s why it’s still curious that this movie would also world-premiere at the American gathering, which, over the last few years, has been losing its long-standing aura and reputation for being a snow-capped refuge for experimentation, modernity and cinematic rebellion.

El planeta was produced by Amalia Ulman, Kathleen Heffernan and Kweku Mandela for US outfit Holga's Meow Pictures, and was co-produced by Sebastián Pardo and Riccardo Maddalosso.

“I don’t understand this crusade against humour”

We had a chinwag with the artist, who has made her feature debut with a film shot completely independently, and toplined by the director herself and her mother

Centring on a mother and daughter scraping by in the midst of the crisis, the feature debut by artist Amalia Ulman is brimming with freshness, levity and a sense of humour

Twelve European films in competition at the 2021 Sundance Film Festival

The Utah-based gathering will showcase movies on its digital platform and at satellite venues across the United States, showing off exciting new European efforts to American audiences 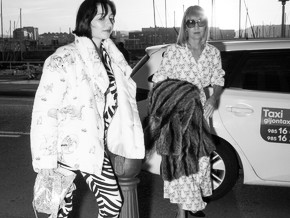