Review: I Comete – A Corsican Summer

05/02/2021 - At once atmospheric, impressionist and multilinear, Pascal Tagnati's beguiling debut feature explores the many different facets of a small Corsican village under the gaze of the summer sun

Breaking with narrative routine, offering the audience oodles of freedom, as if they were merely travellers passing through a land, where everyone shares the same state of mind in an underground cultural and tribal consensus deeply rooted in tradition, and capturing moments of life which, through accumulation and overlap, gradually inform and paint the picture of a very distinctive world… All this beneath the gaze of the sun, which illuminates the omnipresence and abundance of nature encompassing rock, greenery and water, and in the heat of the summer when it feels good to sit on walls and chat, to bathe beneath a waterfall or to party all together once night-time descends…

On embarking upon I Comete – A Corsican Summer [+see also:
trailer
interview: Pascal Tagnati
film profile], a decidedly multilinear fiction film whose nigh-on documentarian multiplicity slowly sketches out a strong, local and transgenerational sense of identity, shored up by the solid bonds of friendship, love and family, but also informed by hidden economic power, Pascal Tagnati was attempting a rather audacious feat. In this first feature directed by the actor, which was unveiled in the 49th International Film Festival Rotterdam’s Tiger competition, the rookie filmmaker leaps like a seasoned tightrope walker from one wire to the next (after carefully fine-tuning the details of the story and the design of his seemingly free performance), from one character to the next and from one subject to the other, pulling it all off perfectly and crafting a work whose great atmospheric charm is composed of individual cards which, when laid on the table, come to form a straight flush. Because let’s not forget that we’re in Corsica now, where characters don’t come in half measures.

In this village where everyone knows each other’s names, where it’s normal to stop for a quick chat, where year-round inhabitants are reunited with friends returning for the summer at which point families come back together, teenagers form groups and flirt with boredom, adults exchange anecdotes, drinking or dancing on occasion, and elderly folk watch from afar with a wary eye (only too aware of what’s gone on in the past), there’s a whole unseen network of things left unsaid. At the centre of the game is friendly thirty-year-old François-Régis (Jean-Christophe Folly), an African adopted by the family secretly dominating everyone’s life (making allusions as to the revenue of gaming circles, a future hippodrome, political support, etc.), which is steered from afar by his uncle and, locally, by his cousins Charles (Ange-Marie Bisgambiglia) and Carina (Davia Benedetti).

As it skilfully probes what appears to be a sun-drenched and “enchanting island break” reminiscent of Short Cuts, I Comete claims a compelling, impressionist right of access to all areas, distilling the essence of this microcosm of a village which is symbolic of Corsican culture, but which resonates with a macrocosm of universal human emotions. In this sense, Tagnati is offering up a film which definitely requires viewers to “go with it” (without looking to understand who’s who and how they know each other at any great speed), but where it’s nice to spend a little bit of time, and which is also a little miracle of production in view of the film’s €200,000 budget, which has nonetheless resulted in wonderful cinematography, its many nuances captured by director of photography Javier Ruiz Gómez.

I Comete is produced by 5 à 7 Films and co-produced by Lotta Films. The film will be distributed in French cinemas by KMBO and is sold worldwide by Best Friend Forever.

more about: I Comete - A Corsican Summer

Interview: Pascal Tagnati • Director of I Comete – A Corsican Summer

The French director talks to us about his debut, an unusual and very well-made feature film which, world-premiered in the 49th IFFR’s Tiger competition

This year's expanded edition saw the triumph of Vinothraj PS's Pebbles, winner of the prestigious Tiger Award; European victors included I Comete – A Corsican Summer and Looking for Venera

Review: I Comete – A Corsican Summer

At once atmospheric, impressionist and multilinear, Pascal Tagnati's beguiling debut feature explores the many different facets of a small Corsican village under the gaze of the summer sun

Produced by France, Burkina Faso and Belgium, the documentary and first feature film by Joël Akafou walks away with the Grand Prize, continuing a wonderful festival career which kicked off in Berlin 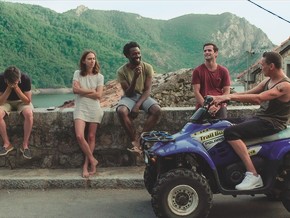