09/03/2021 - BERLINALE 2021: Jonas Bak’s meditative feature debut is a touching portrait of a woman trying to break away from loneliness by paying her elusive son a visit

“I retired today. We’ll see about tomorrow.” When the ticking of the clock in a deserted little bungalow becomes the metronome of your days, reading, knitting and tai-chi video classes leave you with a lot of time to think about your past, about your family and about your children, spread across other cities, sometimes even on another continent — without however going so far as to call them, since they’re busy living their lives. It is in this situation that the protagonist of Wood and Water [+see also:
trailer
film profile], the feature debut from German director Jonas Bak, finds herself at the beginning of the film. Tackling the topic of duality with a tender touch, Wood and Water was unveiled in the Perspektive Deutsches Kino section of the 71st Berlinale.

Living in a pretty little town nestled in a valley of the Black Forest, Anke (Anke Bak) first offers herself a short trip down memory lane: a few days of holiday in the country by the seaside with her daughter Theresa (Theresa Bak), where the family used to live a long time ago (“a symbol of something that is missing in my life or in yours: daddy is gone, this time no longer exists and it will never return”) and where some of their relatives still reside. A place that has changed a lot (what used to be a small forest path is now a large paved road, the old cabins near the beach have been replaced with luxury holiday homes) and one which Anke believes is also missing someone else: her son, Max, who claims to be stuck in Hong Kong due to the pro-democracy protests, but who in reality hasn’t visited in three years, as pointed out by his sister Theresa who is less indulgent or perhaps more of a realist than her discreetly worried mother…

And so Anke abandons her neutral position, her boredom and her floating sadness, and goes through the looking glass. She arrives in Hong Kong and quietly collides with a very different world where, from one harmless encounter to another, she will alone (Max is nowhere to be seen) travel on an initiatory trip where she will learn to understand herself as well as the way things are connected to one another, in part through a psychological investigation of her son’s life journey. For her, this is the beginning of a new peaceful story…

Written and edited by the director, Wood and Water is a calm exploration of the way the space taken by maternal love can be redefined, and an invitation to the voyage rich in delicate propositions on matters such as distance, human contact and spirituality, studied from the most simple scale. An endearing film at the border between documentary and fiction, and one which hides under its humble appearances a very sharp sense for atmosphere, created by the work of Romanian cinematographer Alex Grigoras and the New Space Music of Brian Eno.

Wood and Water was produced by Jonas Bak himself, together with French company Trance Films.

more about: Wood and Water

BERLINALE 2021: Jonas Bak’s meditative feature debut is a touching portrait of a woman trying to break away from loneliness by paying her elusive son a visit 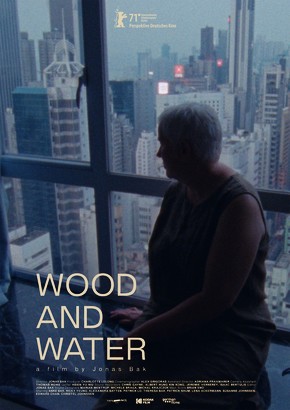