12/03/2021 - Jean-Louis Schuller’s first fiction feature is a wonderful search for identity at the edge of the world, in the Svalbard

In Norwegian, "hytte" means cabin. It is the title of the first feature-length fiction film from Jean-Louis Schuller, presented at the 11th Luxembourg City Film Festival. Initially working as director of photography, he directed the documentary Black Harvest [+see also:
trailer
film profile] in 2014 with Sean Clark, about the modern gold rush in North Dakota, as well as the mid-length film High/Low (2011), with Sam Blair, about the world of gambling games in Hong Kong and Macau. Schuller is interested in extreme people, in men with determination, such as the cyclists training for the Tour de France in The Road Uphill (2011). Sometimes lost, these characters find themselves involved in extreme situations, or in exile. That is the case of Luc who, in Hytte [+see also:
trailer
interview: Jean-Louis Schuller
film profile], arrives in the atypical island territory of Svalbard.

We do not know why this man, played by Luc Schiltz (Capitani) intelligently and with great originality, lands on the shores of Norway’s northernmost territory. This desolated and splendid land situated beyond the arctic circle counts around 2,000 inhabitants.  Many of them are foreign workers who need no visas to work: the region’s legal framework, beyond the realm of Norwegian taxation laws, allows anyone to exploit the resources of this land situated at the edge of the world. In the Soviet era, many Russian people were here. They even founded an industrial town, now a ghost town (it is worth reading Kjartan Fløgstad’s excellent essay Pyramiden: Portrait of an Abandoned Utopia about this very subject).

As soon as he arrives, Luc hears the Russians talk: he visits a deserted encampment which awakens in him a strange fascination. It is in this mysterious setting that this recently divorced family man crosses paths with Mike (Mike Tock). Like Luc, Mike is from Luxembourg. Their encounter follows a drunken night spent under the midnight sun (which lasts from April to August in the region). After mentioning a faraway cabin where he seems to have finally found peace, Mike disappears. The script, co-written by Jean-Louis Schuller together with Jérémie Dubois, skilfully plays with this allegorical character, whose real existence viewers questions throughout the film. He is a mirror for the metaphysical questions animating the main protagonist.

An archetype of the modern man, Luc himself does not know where he is going: in his forties, father of a 7-year-old girl he has abandoned the time of this exile, his constant agitation and his lack of confidence reflect the ills of our times. In its subtext, of course, the film points a finger at technological saturation and the omnipresence of the media.

In his 12-month headlong rush, Luc meets Norwegian woman Ingrid (played by the excellent Ingrid Liavaag, a real revelation). Alongside the young woman he moves in with, the hero questions his masculinity and looks for another definition of coupledom. With her benevolent attitude and her strong personality, Ingrid supports and encourages him.

Shot with an extremely small team, Hytte is a fascinating and unique work. Despite the plenitude and calm imposed by its natural landscapes, this meditative film nevertheless maintains an engaging rhythm thanks to an editing that is both efficient and open to experimentation. For the occasion, many real inhabitants of Svalbard contributed and played themselves. The film is a real discovery and very much worth a look.

Hytte is produced by a_BAHN (which will distribute the film in Luxembourg), Novak Prod, Les Films Fauves and Espera.

Jean-Louis Schuller’s first fiction feature is a wonderful search for identity at the edge of the world, in the Svalbard 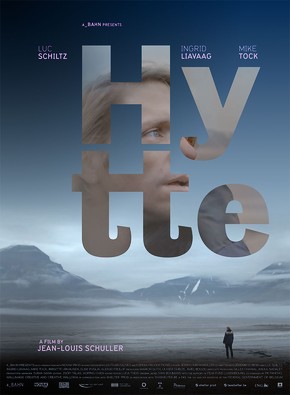