16/03/2021 - Nathalie Berger and Leo David Hyde open our eyes to the world of unpaid internships, which often drive their incumbents into a state of precariousness

The two young directors and activists Nathalie Berger (Switzerland) and Leo David Hyde (New Zealand) - the founders of the human rights-based artistic collective Collectif Bievre - are presenting, this year, in the FIFDH’s Special Screenings section, their documentary Call Me Intern [+see also:
trailer
film profile], offering up a dystopian journey through an all-too-real world where working for free is becoming common currency. What lurks behind the obscure word “intern”? What sacrifices must be made by a young person getting started in the world of work and categorising themselves in this way? But above all, can we really describe an unpaid job (because a job it is) which drives many young people into a difficult-to-escape state of precariousness as ethical and respectful of human rights? Through his own personal experience, as documented by Nathalie Berger, and that of other interns who have come close to losing everything, Leo David Hyde guides us through the ins and outs of a parallel universe to which only the lucky few have access.

In 2015, Geneva was rocked by the story of David Hyde, an unpaid intern at the UN who was forced to sleep in a tent on the banks of Lake Lemano. It was impossible (or, at the very least, very difficult without family “sponsorship”) for him and for many other young interns, enchanted by the power of this institution which commands both respect and fear, to survive a six-month period during which work was synonymous with poverty. Hyde’s story went global, triggering a scandal of planetary proportions. This work by the young New Zealand director (turned undercover operator) and his Swiss partner in crime Nathalie Berger is a clever attempt to denounce the injustices experienced by a generation of Millennials who have been forced to lower themselves to gruelling years of unpaid work (concealed beneath the infamous “internship” label) with the hope of one day being hired by the institution which first encouraged them to dream.

From Geneva, Hyde and Berger’s investigation extends its reach worldwide, exposing the way in which this perverse (yet legally acceptable) machine forces Millennials into a precarious position, transforming them into slaves willing to do anything in the name of a potential, much sought-after wage. The testimonies given by two American youngsters are especially moving: Marisa, an intern who worked on the Obama presidential campaign, and Kyle, an intern for a huge record label (Warner) which is headquartered in New York. Both speak with bravery and honesty about their experiences, about the still open wounds they bear from a period in their lives where hope for a better future drove them to accept (almost) anything, to breaking point. There are no voice-overs accompanying their journeys, just the voices of the protagonists themselves who testify directly, facing the camera, free at last to express themselves and to denounce a legalised system of slavery. Sexual harassment, racial discrimination (there were few, if any, African American interns occupying key posts within Obama’s electoral campaign, and Kyle was the only hip hop-styled African American at his place of work) and exploitation in all its forms (working from eight in the morning until eight at night in the New York intern’s case) are just a few of the sad, behind-the-scenes realities plaguing a parallel world in which silence becomes the preferred path. After an initial period of crisis, Kyle decides to fight (alongside other interns) and wins a financial settlement from Warner Music (four million dollars shared between the plaintiffs).

In Europe alone there are five million interns, half of whom are unpaid - a necessary work force which isn’t always recognised for its output. The exploitation of young people only serves to highlight class injustices, creating a world where only the offspring of well-to-do families can work for free, acting as if material needs are non-existent and all that counts is “dedication”. Call Me Intern has opened up an important debate, allowing interns from all over the world to come together and demonstrate in pursuit of their rights. The road is still long, but the finish line now seems just that little bit closer.

more about: Call Me Intern

Nathalie Berger and Leo David Hyde open our eyes to the world of unpaid internships, which often drive their incumbents into a state of precariousness 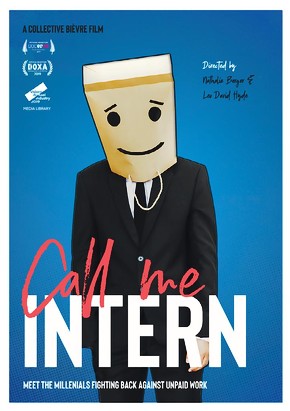 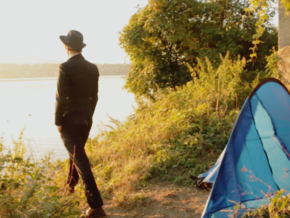