Review: Caught By A Wave

25/03/2021 - Available on Netflix from 25 March, this teen drama directed by newcomer Massimiliano Camaiti tells a thoughtful and solemn story about an adolescent love forced to contend with illness

Christian Roberto and Elvira Cammarone in Caught By A Wave

The emotions of first love clash with the sorrows of illness in the teen drama Caught By A Wave [+see also:
trailer
film profile], which marks the directorial debut of Massimiliano Camaiti who, beneath the Sicilian sun and amidst the rolling waves of the sea, portrays a tender encounter between two adolescents who are passionate about sailing, who fall in love and who find themselves facing a far greater challenge than would usually be associated with training for a regatta.

Sara (Elvira Cammarone) is a fearless, determined young woman. We see her jumping through fire at the end-of-summer bonfire party on the beach, before the disbelieving eyes of her friends, and we see her emerge from the first lesson of her sailing course on the beautiful island of Favignana - an archipelago of the Aegadian Islands in Sicily – and catch up with her young instructor Lorenzo (Christian Roberto) to correct him on his shaky grasp of the difference between “true wind” and “apparent wind”. Needless to say, this will spark the boy’s interest for his talented pupil. Between fireworks, happy faces, secret nocturnal escapades and slow dances at the beer kiosk, their feelings for one another grow. But one day, while practicing at sea, this skilled and tenacious pupil falls overboard and finds herself strangely unable to climb back into the boat without help. It’s at this point that they realise something is wrong.

The scene changes. The sailing course is over, and both students and instructors are returning home, which for Sara and Lorenzo means the city of Palermo. One day, while finishing her lunch, the young woman suffers another painful cramp in her leg, which she tries to hide from her attentive mother (Donatella Finocchiaro). But the reality of the situation soon comes out: the muscular dystrophy she was diagnosed with a few years earlier is rapidly progressing and it won’t be long until Sara ends up in a wheelchair. In the meantime, Lorenzo persistently tries to make contact with her and to reignite the loving relationship they enjoyed in Favignana. Sara avoids him, frightened of telling him the truth, but the boy eventually discovers her condition by himself. Orphaned by his mother as the result of an illness, the news comes as a shock to him. “It’s not a case of running away from pain, but of learning to live with it”, his father (Vincenzo Amato) tells him, who knows exactly what it is to lose someone you love. “Before, I felt anger. Now, I think how lucky I was to have loved her”.

In this sense, Caught By A Wave becomes a hymn to the notion of carpe diem, of seizing the moment and living that moment as intensely as possible so that it stays with us forever. Previously assistant director to Carlo Verdone and Silvio Soldini, the director – who also wrote the screenplay based upon an event in his own life – tackles the theme of illness and thwarted love with great thoughtfulness and sobriety, eschewing melodramatic tones and shedding an interesting light on the course of treatment which awaits young people affected by degenerative dystrophy, as well as the possible risks accompanying this syndrome. There are no great emotional peaks in the film, but it does contain a crucial message for all those youngsters forced to stay at home in these pandemic-ridden times: take the time to enjoy each and every moment of life, even its more challenging and complicated interludes, because life itself is a priceless gift.

Caught By A Wave is a Netflix original film produced by Luigi and Olivia Musini on behalf of CinemaUndici, in association with Mediaset, and is available on the global streaming platform as of today, 25 March.

more about: Caught By a Wave

Review: Caught By A Wave

Available on Netflix from 25 March, this teen drama directed by newcomer Massimiliano Camaiti tells a thoughtful and solemn story about an adolescent love forced to contend with illness

The movies are scheduled to drop on the online streaming platform before broadcasting 12 months later on Mediaset’s generalist TV networks, with a possible stint in cinemas 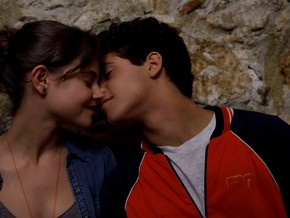