A true portrait of the artist as a frazzled film-festival attendee, Communists! [+see also:
trailer
interview: Christopher Small
film profile] marks the feature debut by respected critic and programmer Christoper Small, who has worked at Locarno, Sheffield Doc/Fest and the Prague-based Doc Alliance. He now steps behind the camera as writer and director, continuing a rich tradition of observers-turned-practitioners before him. Premiering last week at BAFICI (17-28 March) in Argentina, this is a small-scale, handmade-feeling work, made on a micro-budget with an inexperienced cast, yet it nevertheless turns these potential pitfalls into strengths.

It’s that old saw for writers building their craft – to “write what you know”. And this is indeed a work completely steeped in film-festival and cinephile culture: we have Il Cinema Ritrovato Bologna tote bags, industry shop talk around candlelit tables strewn with half-empty wine bottles, accusations of nepotism around the competition line-up, and that total aura of overstimulation and exhaustion that comes from a weekly diet of art films and small talk. Yet all this never feels elitist or overbearing, because Small’s film is patently aware of these shindigs’ relation to normal society, and the vulnerability of the creators and cultural workers who pass through them. The title is a giveaway, a joke and an existential question – can any revolutionary social consciousness be found at these gatherings, in spite of the political films that dot their line-ups?

Communists!’s film-within-a-film, creator’s-creative-block plot evokes Spike Jonze’s Adaptation, but a better comparison that occurred to this critic were Jacques Rivette’s observational tales of isolated young people, and the conspiratorial intrigues that engulf them like ivy around a dilapidated house. Sacha (Poppy Rivers-Vincent) is a 21-year-old experimental animator showcasing her second (!) feature at a fictitious but highly prestigious film festival in South Wales. It’s an area with familial resonance for Sacha: her left-wing, bohemian grandmother hosted many artists and other transients in her old house, and her adopted cousin Connie helps run the festival located nearby. Sacha is feeling blocked in her work and wants to make a live-action film with a greater social impact – hence the “communists” – with the research process starting on this trip.

Walking in the woods in her downtime, she witnesses a horrific act of violence, and if premiering a new experimental film to one of its very first audiences weren’t enough, she now has no choice but to behave like a character in another genre of film – the crime potboiler. It’s as if we were to go to a film festival unvaccinated, and we could “catch” the aura of a film we see upon exposure; this is the feeling as these genre tropes attach themselves like a spore to this drama of dissatisfied millennials.

Communists!’s unvarnished, minimalistic feel and sometimes over-exposed-looking digital photography may strike certain viewers as amateurish, yet it exists in a particular lineage of cinephilia-informed films with limited means but much to express. It’s like an optical illusion: Small is heavily reliant on off-screen space to give the impression of a teeming film festival beyond his frames, which often simply feature characters conversing in a two shot with the camera at their exact height. But he sells it to us, and thus we have the canny artifice of cinema, necessary in productions of a far bigger scale than Communists!

Communists! is a UK production solely produced by Christopher Small for his own filmmaking label Antinomovies.

“I first found the people, and then moulded the characters to fit them”

The British author, curator and film critic broke down his first directorial effort on the occasion of its premiere at this year's BAFICI 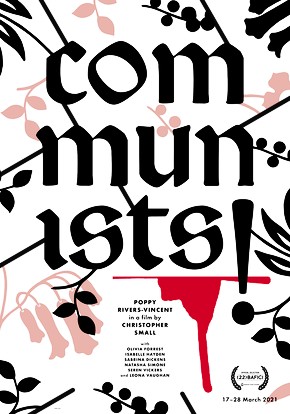