For his second feature-length documentary as a director, Salt from Bonneville, which has world-premiered at Docudays UA and received a Special Mention in the DOCU/UKRAINE competition, multi-hyphenate Ukrainian filmmaker Simon Mozgovyi had an appetising premise: two friends soup up an old Soviet motorcycle and try to break the world speed record for vintage bikes. However, while visually attractive and technically accomplished, the film lacks a real dramatic core.

Maxim and Nazar are working on the IZH-49, a motorcycle made in 1951, with the aim of competing at Bonneville Salt Flats in Utah, USA, where enthusiasts from around the world traditionally gather to break speed records on their pimped vehicles. We meet them in a garage in the Kyiv suburbs, as they work on the machine and prepare to travel to the States.

Once there, things actually seem to go relatively smoothly for the pair, and they are joined by a clutch of supporters who are all, apparently, Ukrainians living in the USA. The locals appreciate foreign additions to the eminently American event, but little is revealed about the contest itself. When the viewer hears that the current record is 133 km/h, it is a little underwhelming, as they have not been initially informed that the heroes are competing in the vintage-bike category. We do realise their motorcycle would be considered vintage, but for the uninitiated, which would be the majority of the film's potential audience, it is not self-explanatory.

Mozgovyi takes an observational approach to the documentary, which means that there is little exposition, and that any tension or suspense about breaking the record would take a back seat to character development and the heroes' relationship. But the problem is that not much is happening between the two, and in fact we learn even less about them than about Bonneville itself.

The bike belongs to Maxim, who seems more like a regular thirty-something guy who just happens to have inherited it and got curious, rather than being a true speed enthusiast. Nazar, on the other hand, with his long, braided hair and epic moustache, is a more energetic and engaging character, who will maybe even decide to stay in the USA. The two occasionally bicker, but this does not go much beyond technical issues with the vehicle.

However, Bonneville itself is an inherently cinematic location, an endless field of white against a clear, blue sky. It is in fact so large, an old newsreel informs us, that one can see the curvature of the Earth with the naked eye. But the competition is not Daytona or Formula One, with crowds of cheering spectators: this is just a bunch of speed freaks doing their thing in the salt desert, competing against the clock. A drone shot gives us an idea of the dimensions of the event, and they are impressive, but we never get to see another vehicle's attempt at a record, although in the background we can spot some intriguing contraptions that we'd like to get more closely acquainted with.

On a couple of rides that Nazar goes on, the camera runs alongside the bike, but the impression of speed has already been underscored by what we have learned before. So, in the absence of any character development and without a feeling of competition, the viewer is left only with some cool visuals, shot by Mozgovyi, Denis Melnik, Serhii Stetsenko and Dmytro Gorash, and the very accomplished music score by Zviad Mgebry and Luka Lebanidze, which uplifts the film and provides it with some much-needed dynamics.

Salt from Bonneville is a co-production between Ukraine's Atlant Media Group and Mainstream Pictures, and Poland's Stewopol.

more about: Salt from Bonneville 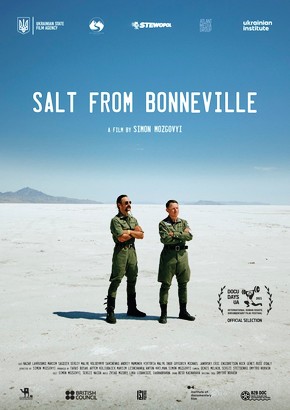 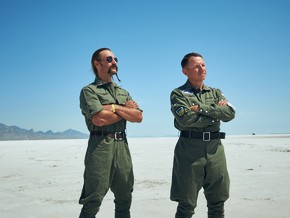 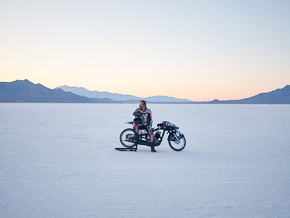