20/04/2021 - In their first feature-length documentary, Nikola Ilić and Corina Schwingruber Ilić deal with a painful personal story in an engaging and optimistic way

The Serbian-Swiss filmmaking and married couple Nikola Ilić and Corina Schwingruber Ilić have been a stalwart presence on the European short film circuit, making films both together and separately, including two wins in a row at the Swiss Film Awards with Rakijada and All Inclusive, their biggest hit to date. Their first feature-length documentary, Dida [+see also:
trailer
film profile], has now had its world premiere in Visions du Réel's Burning Lights Competition, and marks another example of their dynamic, engaging and often upbeat take on serious topics.

The eponymous Dida is Nikola's mother. In his voice-over narration, the co-director explains that she never really recovered from a seizure she had had when she was two years old, and consequently faced serious learning disabilities. This is why he was brought up by his grandmother, and the film opens with the four of them - Dida, Grandma, Nikola and Corina - at the cemetery, marking another anniversary of Grandpa's death with rakija and Nikola's favourite dish, sarma. Judging by the mood, one would assume this event to be some sort of celebration and not such a solemn occasion.

This paradoxical spirit pervades the film, which mostly takes place in various apartments in Belgrade and in Lucerne. The one in Belgrade where Grandma and Dida live is somewhat neglected and extremely cluttered with items that the two women have accumulated over the decades. Meanwhile, Nikola and Corina are renovating another place. They live in Switzerland most of the year, and frequently come to visit, but Dida's flat is too small for everybody to fit in.

At one point, Dida is diagnosed with cancer, and after the first round of therapy, she visits them in Lucerne. Yet one wouldn't be able to tell that the almost perpetually smiling lady is ill: she is, in a way, like a bright-eyed child, she loves animals and reading and is over the moon when Nikola gives her a copy of "The Hobbit" for her birthday. But this is not to say that she is not intelligent: whatever her disability really is, which is never revealed, it is not severe.

When Grandma dies, a new chapter begins for everybody. Dida cannot fully take care of herself, her budgeting skills are non-existent and she could be an easy prey for various exploiters of old and lonely people. Nikola is now torn between his responsibility towards his mother, and his life which has its own course. He and Corina will have to try and find a way to do both at the same time.

The film works well both on a personal and a social level, but focuses on the former. This is a situation that many immigrants find themselves in, but the film also relates a very specific story. The dominant tone is bittersweet and melancholy, though it is frequently tweaked by the spirit of the protagonists and filmmakers, which uplift it and make it hopeful and optimistic. A key addition to this aspect is the upbeat score by Heidi Happy, with bass, accordion and piano sounding as if they were accompanying a Paris cafe scene in a 1950s Hollywood movie.

The camerawork by the co-directors and Pablo Ferro Živanović conforms to the circumstances, often filming in messy, cluttered spaces between the pieces of furniture or the dozens of blankets that Dida insists she needs. As for the exteriors, one would be pressed to find a bigger urban contrast than the one between the bruised grittiness of Belgrade and the lakeside, fairytale-like Lucerne, and the co-directors certainly know how to capture and use both.

Dida was produced by Dschoint Ventschr Filmproduktion AG, with SRF and SRG SSR on board as co-producers.

In their first feature-length documentary, Nikola Ilić and Corina Schwingruber Ilić deal with a painful personal story in an engaging and optimistic way

The 10th edition of the East Doc Platform, organised by the Institute of Documentary Film (IDF), will take place online from 6-17 March 2021 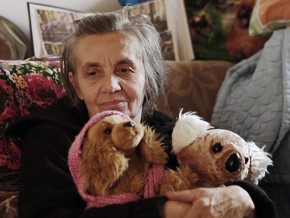