22/04/2021 - Tomasz Wolski's latest documentary combines archive footage, phone conversations and stop-motion puppets to tell the story of one of the bloodiest protests in Polish history

In 1970, in a mind-boggling turn of events, the Polish government decided to raise the prices of meat, other groceries and necessary items just 11 days before Christmas. This resulted in one of the biggest and bloodiest protests in the country's history. The event is the topic of 1970 [+see also:
trailer
interview: Tomasz Wolski
film profile], the newest documentary from Tomasz Wolski, playing at this year’s Visions du Réel. The film compiles archive footage and recorded telephone conversations between members of the government's crisis team to create a unique documentary that is a thematic and formal follow-up to his previous film, An Ordinary Country.

But what does one do with just the audio recordings of these conversations? Wolski went for stop-motion animation. The film opens by introducing us to these historic characters, represented by puppets based on their real looks. All of these men were high ranking officials in the ministry of internal affairs and the army, and to most international viewers, their names will mean little. But this does not matter: any other powerful figures in any other communist country at the time (would) have acted the same, and today, with protests erupting around the globe, we are witnessing similar reactions both in developing countries and in so-called Western democracies.

The 1970 protests started with strikes in the shipyards of Gdansk and Gdynia and soon spilled out onto the streets, supported by students. Wolski, however, takes the point of view of the government and puts us in the animated offices, full of heavy furniture, with tables covered with bottles, flowers, fruit and overspilling ashtrays. The images are murky and the colours dark, not least because of everybody smoking all the time, but also in order to place the viewer in the proverbial shadows where power operates. He also adds lines and cracks to the picture, emulating the quality of the old, black-and-white 16 mm archive footage of protests in the streets which constitute the rest of the film. Opting for a 4:3 ratio, Wolski creates a time capsule for the audience, and keeps the film enviably consistent.

At first, it seems like the bigshots are not overly concerned, but protestors set the Gdansk railway station on fire, followed by a government building, then take police officers and shipyard bosses hostage. The atmosphere grows hotter and the phone conversations more hectic and confused, with Wolski adding Bartłomiej Tyciński's and DJ Lenar's suspenseful score in which a menacing drone sound is the background for ascending strings.

The protestors' view is exemplified through graffiti and slogans on walls, wooden fences and trams, demanding, among other things, that workers be paid the same salary as politicians — and inevitably reminding us of today's conversation around the 1%. On the streets, the police and military with their tanks and armoured vehicles beat up and arrest protestors, but also receive barrages of Molotov cocktails and stones. One politician says: "This is a new sociological phenomenon. It used to be enough to send a company to break up a group of one thousand. Now, even a battalion is not enough.” — yet another connection to today's Western society, where democracy and tolerance have been revealed to be empty words when they don't cater to the powerful.

Although they are mostly concerned about three people stuck in the burning government building, the Polish politicians in 1970 first try to avoid total carnage. Eventually, however, they come up with propaganda plans for how to frame this eight-day incident with hundreds of wounded and 41 dead in the news reports — and must be aware that they are being recorded. All of this prevents us from perceiving them as even a bit humane, and this is the attitude that we should have towards those in power today.

1970 was produced by Kijora Film, with Polish Television and Institute of National Remembrance as co-producers.

“You can't always focus on what's difficult. Sometimes you need to tell a joke”

Tomasz Wolski's latest documentary combines archive footage, phone conversations and stop-motion puppets to tell the story of one of the bloodiest protests in Polish history 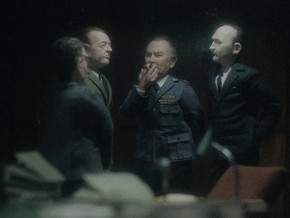