We are getting more and more documentaries that investigate what fuels the convenient life we are living and warn us of its human cost. Canadian director Shannon Walsh's The Gig Is Up [+see also:
trailer
film profile], which had its North American premiere at Hot Docs, is among the cream of the crop.

It deals with the gig economy: Uber, Deliveroo, Bolt, Wolt, Lyft and an ever-growing bunch of apps that pair services with customers use so-called "free contractors". While the idea of working without an office and choosing your own hours sounded attractive some ten years ago, when these started popping up, their business model has reduced the contractors to slaves who always have to be attentive and nice to customers while doing physically and mentally exhausting work for very little money.

Then, there is the next level. As customers, we at least get to see drivers and delivery people, so we have started recognising that an older person bringing you your kung pao is probably not enjoying what they are doing. But there is a whole world of "ghost workers": as Mary L Grey, a Microsoft researcher and co-author of the book Ghost Work, explains, we believe that everything that comes from the internet is automatised, and that computers and AI are simply working their magic. But there are many things that computers can't do. This is why companies use Amazon's Mechanical Turk (or MTurk, named after an 18th-century chess machine that was secretly controlled by a human) to match them with people around the world who get paid (very little) to tag images, teach AI, do surveys, transcribe audio and carry out other types of actions.

In addition to Grey and other experts, such as The Atlantic writer Derek Thompson and tech entrepreneur Prayag Narula, who provide often eye-opening insights into the mechanisms of the gig economy, Walsh introduces us to these invisible workers and their bike-riding, taxi-driving counterparts. In Paris, together with an association of gig workers, Deliveroo cyclist Leila is fighting for the rights of her friend Mourad, who got into an accident while delivering a meal and is fighting for his life in hospital. In San Francisco, Uber and Lyft driver Al Auodi is getting organised with others – including Annette, who quit her job to drive for Uber and is now bitterly regretting having done so – to force the government to adopt Assembly Bill 5, under which they would be classified as employees, gaining benefits and health insurance. To find out how this panned out, Google the bill.

In Florida, 36-year-old Jason, who lives with his lottery-addicted mum, has found a way to cheat the system. A former convict with a mouthful of solid-gold teeth, he has practically no chance of getting a normal job. So he works on MTurk and is doing fairly well with surveys, thanks to him pretending to be an African-American Republican.

Many other people from around the world give their testimonies, in short excerpts presented as Facebook or Instagram stories. It is modern slavery, and Thompson explains that it is a business model based on huge subsidies from governments so that these companies can deliver their services to customers at a cost way lower than their real value. "A semi-permanent subsidisation of our lives, which cannot last long," as he puts it.

Walsh has managed to fit a huge amount of information into 88 minutes of running time, and the way she tells the story not only clearly maps out the mechanism of this pseudo-economy, but also emotionally connects the viewer to the very human stories of the gig workers. After watching this film, maybe you will think twice before giving a delivery a low rating just because you're grumpy, or because a beverage got spilled from a paper cup inadequate for being transported in a bag on a cyclist's back. But will you agree to give up the convenience that your everyday life is organised around?

The Gig Is Up was co-produced by Canada's Intuitive Pictures and France's Point-du-Jour. Dogwoof has the international rights.

more about: The Gig is Up 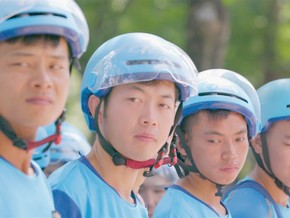