11/05/2021 - Vinko Möderndorfer pits two couples against each other, over the course of a rainy night in one apartment, with high stakes at play and an urgent decision needing to be made

Vinko Möderndorfer is a prolific Slovenian poet, writer, playwright and stage director with dozens of literary volumes to his name and over a hundred theatre productions under his belt. His filmmaking repertoire is not quite so large, but Möderndorfer has positioned himself as a director who is not afraid of drilling down into society’s traumas and pointing the finger at different degrees of injustice, as was the case with his best-known work, the crime-thriller Landscape no. 2 [+see also:
trailer
film profile] (2008) and his earlier effort, the disturbing and not too successful Inferno [+see also:
trailer
film profile] (2014). His latest film, Deadlock, has just premiered in competition at the Belgrade International Film Festival.

Deadlock starts with a thriller cliché: torrential rain that causes traffic troubles all over Europe and briefly steals the headlines from topics such as the refugee crisis. Mejra (Mirjam Korbar) is alone in her apartment in the Fužine district of Ljubljana, known for its predominant immigrant population from the southern ex-Yugoslav states. A strange man, whose name is later revealed to be Andrej (Uroš Fürst), appears at her door, saying that he has something important to talk to her about, though he is reluctant to tell her what the deal is exactly. Mejra’s husband Emir (one of Slovenia’s best liked movie actors, the late Peter Musevski) comes back home after watching an important football game at a local bar, and the crew is completed when Andrej’s wife Barbara (Barbara Cerar) joins them.

At first, it seems the two couples have nothing in common. Emir and Mejra are poor, working-class immigrants from Bosnia, while Andrej and Barbara are members of the Slovene financial elite. The only thing that could possibly connect them is the age of their children, Mirsad and Anja. They might not know each other, but they are both lying in the same hospital and one of their hearts could be the perfect match for the other. Negotiations, fights, begging and pleading ensue, and, as is usually the case with such argument-based dramas, people switch sides, and form and dissolve alliances, while time is of the essence and they are in an ongoing, well, deadlock.

Superficial parallels could be drawn with Roman Polanski’s Carnage [+see also:
trailer
film profile], but apart from the apartment setting and argument dynamics, the two films have little in common. Möderndorfer is more interested in plays on morality and questions such as whether one life is worth more than another depending on class or even ethnic background. The same dilemma goes for parenting and feelings of pain and impending loss.

For the first time in his filmmaking career, Möderndorfer embraces his theatre background to the fullest, so his habit of talking through the characters is not that much of an obstacle here. On the other hand, he tries to break the monotony of the setting with situational shots from outside of the building and flashbacks in which his tendency to over-explain presents a bit of a problem. Fortunately, he can rely on his actors, especially the male component of the cast. Musevski’s intuitive, heart-felt, “all in” approach suits the film perfectly, while Fürst’s sleazy charm also does the job. Considerable added value can be found in Mitja Ličen’s stark, black-and-white cinematography via ARRI Alexa, Jurij Zornik and Ognjen Popić’s striking sound design and, above all, in the superb editing of Jurij Moškon and the recently deceased Andrija Zafranović, for whom Deadlock is his final credit.

Deadlock is a Slovenian-Serbian-North Macedonian film produced by Forum Ljubljana in co-production with Delirijum and Sektor Film. The film was backed by the Slovenian Film Centre, the Film Centre of Serbia and the North Macedonia Film Agency, with technical support from Viba Film Studio.

Vinko Möderndorfer pits two couples against each other, over the course of a rainy night in one apartment, with high stakes at play and an urgent decision needing to be made 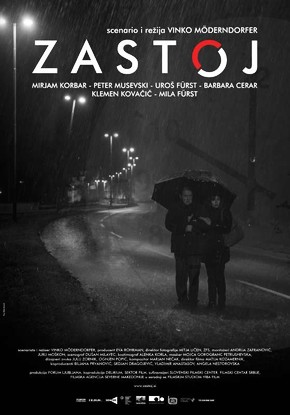 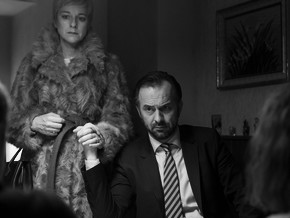