14/05/2021 - Igor Legarreta tells a sorrowful, sinister story of vampires, in which a girl who has fallen victim to the shortcomings of adults is forever trapped in childhood

In 2017, Igor Legarreta made his feature-length directorial debut with When You No Longer Love Me [+see also:
trailer
film profile], a Spanish-Argentinian co-production recounting a family drama story with political conflict, a certain sense of humour and, deep down, a hint of romanticism. Now, he is releasing Ilargi Guztiak. Todas las lunas [+see also:
trailer
interview: Igor Legarreta
film profile], a picture seemingly a far cry from his first effort, although they do share certain similarities. Because this is a film that slots into the mythological-fantastical genre; however, it doesn’t seek to provide shocks or cheap horror tricks, but rather prompts reflection and even covers existentialism as it broaches such intense topics as immortality, faith and, just like in his feature debut, the complex relationships between fathers/mothers and their children.

Above all, the Basque filmmaker uses this terrible tale to highlight the dark, selfish side of love, when we mistakenly think that our loved one is our private property. Here, we see a stifling mother-daughter relationship, where the offspring is forbidden from flying free, and where the adult looks to the child for a remedy for loneliness and to fill the void within themselves. In this movie, set during the troubled times of centuries past, a witch (played by Itziar Ituño) seeks to make up for her shortcomings by finding a wounded girl in the woods (first-time actress Haizea Carneros) and holding her prisoner. However, she fails to specify the small print of the contract that she offers her to sign: in this case, it involves being condemned to immortality.

In order to tell such a spooky story, Legarreta has drawn on magical naturalism, as contradictory as that may sound, because much like Czech photographer Jan Saudek, from whom the director drew inspiration in his mise-en-scène, he has mixed a certain starkness and realism with a particular use of colour: the atmosphere is gloomy and shadowy, but is by no means monochrome nor in faux black and white, even though the action begins in the 19th century. Its initial part is blueish, closely linked to the night, then there is a central segment with warm, yellowish hues, concluding with a third act where red is the dominant colour.

In addition, the film oozes a religious aura when discussing immortality, that ability to overcome death, thus countering the idea that one's demise is a part of life. It also tackles the fact that faith provides the promise of an afterlife, a bit like a remedy to the fear of disappearing. Thus, while the vampires in this feature avoid suffering and pain, they end up condemned to eternal solitude, bereft of happiness; meanwhile, the character of Cándido (Josean Bengoetxea) yearns to feel alive by loving once again… but this time unselfishly.

Ilargi Guztiak. Todas las lunas is a production by Spanish outfits Arcadia Motion Pictures, Kowalski Films, Pris&Batty Films and Ilargia Films, in co-production with Noodles Production (France). Filmax is in charge of its distribution in Spanish theatres as well as its international sales.

As Fantasia unveils its first wave of programming, vampires and Estonian demonic spirits are in

The 25th edition of the largest North American genre festival will welcome Estonia’s Kratt and new takes on those good ol’ bloodsuckers, courtesy of Igor Legarreta and Joann Sfar

Igor Legarreta tells a sorrowful, sinister story of vampires, in which a girl who has fallen victim to the shortcomings of adults is forever trapped in childhood

After making his debut with When You No Longer Love Me, the Basque director is in the north of Spain until April, filming a dark drama with fantasy and horror elements

The provisional 2019 list of general production support for film projects has just been made public; Coixet’s Nieva en Benidorm and Bollaín’s La boda de Rosa are two of the recipients 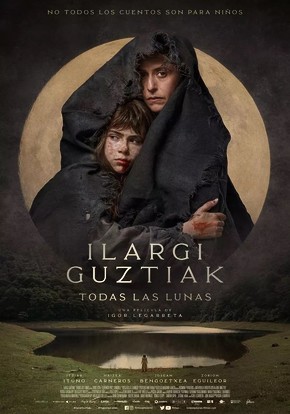