04/06/2021 - Blending science-fiction and the greyness of the Parisian banlieue, Maxence Stamatiadis pinpoints the illusions surrounding AI in a profoundly dark and disturbing first feature

"It’s a type of computer modelling which tries to resemble the functioning of the human brain". And what’s the marketing argument behind it? That it allows love to triumph over death and our loved ones to return to live with us, reincarnated within a different human casing which is powered by data from memories. And obviously, it all begins with the downloading of an app. Are we looking at a case of far-off, futurist madness? Perhaps, but the dizzying advances currently being made in artificial intelligence and communication technologies make this hypothesis (and its risks) plausible for a future that’s no doubt far closer than we think. Such is the scenario envisaged by French filmmaker Maxence Stamatiadis in his disturbing debut feature film The Day Today [+see also:
trailer
film profile], which was unveiled in a world premiere within the Harbour section of the 50th IFFR (whose second instalment is unspooling this week).

"I’d like to be an atomic bomb exploding (…) My desire to kill remains intact, omnipresent (…) I don’t have enough of anything, except fear, terror, powerlessness." Beneath his appearance as a highly reserved, retired grandfather, Edouard (Édouard Mouradian) hides an ocean of hatred for himself and for the wider world, which he pours into his writing on his computer and into his games of Call of Duty via the joystick in his hand. It’s 2013 and we’re in Pavillons-sous-Bois, in the Parisian suburbs, an environment of concrete, asphalt and car traffic, where Edouard’s wife Suzanne (Suzanne Mouradian) gets about her business (cooking, yoga classes, phone calls to friends, discussions with their adolescent granddaughter, steady consumption of reality TV) before she falls victim to a violent attack (a hooded man smashes her car window with an iron bar in order to steal her handbag).

Edouard subsequently dies (of an illness) and the story leaps forward to 2024, where his widow succumbs to an advertisement: "The Day Today, the new service that’s all the rage right now. It’s an app: you sign up, you tell your story and you talk about the person you’ve lost". Suzanne uploads photos and fills out Edouard’s profile ("Step 1: We analyse your data; Step 2: You describe the style of your Loved One; Final Step: We generate your L.O."). A very real person subsequently presents himself (a "swapper") and then, one brain split and one synchronisation process later, Edouard is back home with The Day Today logo emblazoned upon his head: a horizontal 8 (a symbol evoking the structure of a DNA molecule, as well as time, eternity, eternal love and a portal between the physical and spiritual worlds). But this rebirth and AI deep learning have failed to eradicate Edouard’s appetite for murder…

Deeply pessimistic, the film mixes human and societal malaise in the style of a documentary without making any concessions to aesthetics (whether in terms of the webcams or the mundane ugliness of the surrounding urban environment). Its combination of ultra-realism and science-fiction (which sees a corner shop owner promoting bitcoin and a female neighbour revealed as a fan of the dark web) provides Maxence Stamatiadis with the signature of a real auteur, one which takes the viewer by surprise, and which drills down deep into intelligent subjects. That said, the omnipresent, shadowy side of the film (a corrupt, broken-down and brutal world, despite its ordinary appearance, whose inhabitants are prepared to accept all manner of defects and flaws in the name of love) does make for a film that’s difficult to digest, troubling and nigh-on disturbing the viewer, which was probably the intention of this original and radical director.

The Day Today is produced by Hutong Productions, Agathe Berman Studio and Bad Manners, and is sold by Oyster Films.

more about: The Day Today

Blending science-fiction and the greyness of the Parisian banlieue, Maxence Stamatiadis pinpoints the illusions surrounding AI in a profoundly dark and disturbing first feature 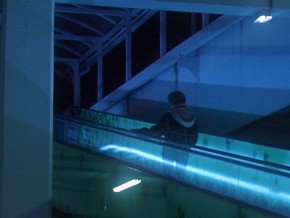