17/06/2021 - The first to be made while working from home during the lockdown of 2020, Daniele Vicari’s film is a technically accomplished experiment and an act of artistic resistance

Isabella Ragonese in The Day and the Night

“Films should always connect with what’s going on in the world around us, and speak about it, not turn away and pretend that nothing’s going on”. These are the words of Daniele Vicari, who did anything but turn away on the occasion of the pandemic which has seen the world turned upside-down over the course of the past year. Instead, he rolled up his sleeves, alongside a cast of nine actors and a technical crew with whom he was in constant contact via Zoom, and used lockdown 2020 to create what will go down in history as the first Italian film shot while working from home: The Day and the Night [+see also:
trailer
film profile] (read our news).

Directed remotely by the helmer of Diaz – Don’t Clean Up This Blood [+see also:
film review
trailer
interview: Daniele Vicari
film profile] and Sun, Heart, Love [+see also:
film review
trailer
film profile], and made with the help of actors Dario Aita, Elena Gigliotti, Barbara Esposito, Francesco Acquaroli, Isabella Ragonese, Matteo Martari, Milena Mancini, Vinicio Marchioni and Giordano De Plano – who, from the comfort of their own homes which were transformed into film sets, followed the instructions of the set designer, the costume designer, the director of photography and the sound engineer, to embark upon three weeks of prep and four weeks of filming via smartphone - The Day and the Night is a miraculously accomplished film experiment from a technical viewpoint, and a praise-worthy act of artistic resistance, produced at a time when all film sets were closed, people were isolated in their homes and the world was in limbo and afraid.

But the focus of the film isn’t Covid; instead, it explores what can happen to human relations when we’re trapped together within the same four walls with no escape, or, conversely, when we can’t meet up with one another. And it does so by way of a narrative device (courtesy of a screenplay by Vicari and Andrea Cedrola) which distances the work from its highly topical subject to prevent it from feeling dated post-pandemic: in the course of a regular day, when the streets of Rome are filled with traffic, an alarm is suddenly raised on the national news, warning of the imminent risk of a bioterrorist chemical attack: the city’s residents are told to return to their homes immediately and stay put.

It’s in this context that we follow the fates of three couples (who also live together in real life) who find themselves stuck between their own four walls for a day and a night, and are confronted with the reality of their feelings for one another: Anna and Manfredi (Gigliotti and Aita), the former a fledgling actress, the latter an established actor who thinks only of his career and neglects their relationship; Marco and Marcella (Marchioni and Mancini), lifelong friends, though he is secretly in love with her while she is married to his best friend Sergio (De Plano); and Andrea and Beatrice (Acquaroli and Esposito), who are reeling from the tragic loss of their child and are sitting on one or two secrets. Alongside them, we find Ida and Luca (Ragonese and Martani), who have only had the opportunity to spend one single night together and, now that it’s impossible for them to meet up, can only experience the various stages of a love story by sending each other photos and videos.

A Day and a Night is one of those projects where the underlying motivation (in this case, the desire to make a film, despite it all, improvising in any way possible) is more important than the final product, which isn’t without its flaws or somewhat predictable dynamics. Indeed, the fact that the actors have laid themselves bare and opened up their homes to us - homes exuding truth and revealing tiny defects, which seen them dipping into their own wardrobes, applying their own make-up and positioning lights and cameras (the types of jobs which would usually be performed by a dozen or so people on set) – results in an experiment which not only oozes a great sense of solidarity, but also a passion for cinema and a vitality which can only benefit a sector which has suffered so extensively this past year.

Produced by newly formed firm Kon-Tiki Film, A Day and a Night is available exclusively on RaiPlay from today, 17 June. Distribution in Italy and elsewhere is entrusted to Fandango.

more about: The Day and the Night

The first to be made while working from home during the lockdown of 2020, Daniele Vicari’s film is a technically accomplished experiment and an act of artistic resistance

Vicari is directing nine actors inside their own homes, after having sent them a filming kit; the movie explores the emotions of four couples confined to their abodes 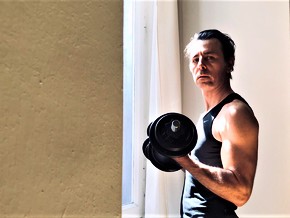