07/07/2021 - CANNES 2021: Juliette Binoche infiltrates the daily life of contemporary precarity in this feature with a humanist vision by Emmanuel Carrère, freely adapted from a book by Florence Aubenas

“Your personal project? To orient yourself towards the specialty of service agent. Cleaning jobs are the future, they can't be relocated.” Without qualifications nor professional experience, in territories highly impacted by unemployment, job prospects are extremely limited. At best, at 7,96€ net per hour, only a precarious life is possible (since one must have a roof, feed one’s family and put some gas in the tank), punctuated by 4:30am wake up calls and the cleaning of soiled toilets (best avoided since the most experienced know that it is better to be on mopping duty) at intensive rates. It’s in this disadvantaged universe that celebrated journalist Florence Aubenas plunged undercover to write Le quai d’Ouistreham, a book freely adapted by novelist-filmmaker Emmanuel Carrère (with Hélène Devynck as co-screenwriter) into the feature titled Between Two Worlds [+see also:
trailer
interview: Emmanuel Carrère
film profile] that opened the 53rd Directors’ Fortnight as part of the 74th Cannes Film Festival.

Settled incognito in Caen, the (very famous) writer Marianne Winckler (Juliette Binoche, impeccable in the role and surrounded solely by non-professionals) reinvents herself a life in another town as a spouse abandoned after more than 20 years as a housewife. “I need to start over from zero,” she explains at the employment centre where she is advised to present herself as “dynamic, jovial, with a team spirit and available at all hours, including on Sundays.” After a quick training (in SBAM – Sourire Bonjour Au Revoir Merci, meaning Smile Hello Bye Thanks – and with the scrubber), she finds herself propulsed into a small group responsible for the (express) cleaning of about thirty bungalows, sanitary facilities included. Gradually, from one job to the next, Marianne discovers the tricks of the trade and sympathises with “a few chore mates,” which brings her to a new job in Ouistreham: to clean at full speed the cabins of the ferries in perpetual rotation between France and England, in the very short amount of time between passenger disembarkation and the boarding of the next travelers. This difficult and laborious existence is softened by worker solidarity and interrupted by a friendly rapprochement with Christèle (Hélène Lambert), a mother of two whose portrait the writer has secretly decided to make. But aren’t the good intentions delicately hidden by the infiltrator ("I'm tired of hearing about precariousness in an abstract way, I want to make the invisible visible, to understand") a kind of betrayal?

By modifying the trajectory of the book to inject it with an affective dimension (which Florence Aubenas had carefully avoided, out of deontology), Emmanuel Carrère opens the film up to a more empathic and melodramatic realm, a choice that has its good narrative reasons but which could be debatable, as it generates a bit of artificiality in a frame that generally rings true (notably thanks to its ensemble, steeped in humanity). Filming in an intentionally classical tone and avoiding any overbidding or harshness in order to better recreate a social world whose banal difficulties speak for themselves, the director does not disappoint, signing a feature film that will present an important topic to a wide audience. However, we can still wonder what Ken Loach, the master of the genre, would have done with such material.

Produced by Curiosa Films and Cinéfrance Studios, and coproduced by France 3 Cinéma and Studio Exception, Between Two Worlds is sold internationally by France TV Distribution.

more about: Between Two Worlds

“The film has a social aspect, but also a hitchcockian element”

CANNES 2021: The famous novelist once again turned filmmaker decrypts his free adaptation of the book by Florence Aubenas, which opened the Directors’ Fortnight

CANNES 2021: Juliette Binoche infiltrates the daily life of contemporary precarity in this feature with a humanist vision by Emmanuel Carrère, freely adapted from a book by Florence Aubenas 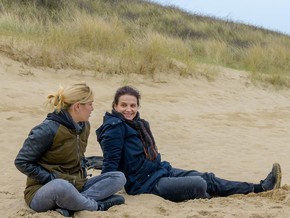 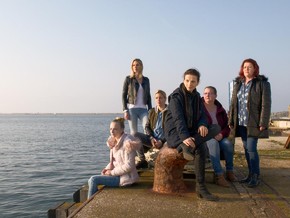