Three years after Farewell to Africa [+see also:
trailer
film profile], and galvanized once again by the need to shine a light on realities which are marginalised for being too far removed from our own, and which are only ever covered in news reports at best, Swiss director Pierre-Alain Meier has shifted his gaze to the Lebanon where 1.5 million displaced Syrians now live their lives in search of respite; a place (albeit very basic) where they can stop and rediscover hope that things can change.

Presented in a world premiere at the Fribourg International Film Festival, Love of Fate [+see also:
trailer
film profile] is one of those films which leave an indelible mark. What strikes us, culminating in the final, tragic revelation, is the discretion displayed by the director as he follows two different families a few days ahead of their departure for Germany. Bouncing between hope and the sadness that comes with having to leave everything they’ve ever known behind them, the protagonists of Love of Fate exist in an undefined time-space, an artificial “here and now” composed of temporary “homes” which house memories of a lifetime and which act as a backdrop to identical days spent waiting for something to change.

Without ever sliding into miserabilism, Meier’s latest film examines the consequences of uprooting entire families and the ability that each of us has to start over again as the thought of those we’ve left behind weighs heavily upon us. They can control (almost) anything, from the detailed organisation of the journey to settling down in Germany, the two families’ host country. But, unfortunately, destiny follows its own rules. Indeed, the latter upends their plans at the very last minute, preventing one of the two groups from setting off. Germany might have represented a veritable rebirth for them up to that point, but for now, it’s life in its most desperate simplicity which takes the upper hand.

The director’s subtle approach towards filming the daily lives of his protagonists leaves room, in the film’s final, tragic scenes, for reality as it really is: unpredictable and cruel. The situation becomes increasingly complicated, of course, but hope continues to hover over this film, like a thick and defiant fog: in Germany, members of the host association try to find alternative solutions; in Lebanon, there are attempts to move on from the tragedy in order to (potentially) be able to hope again. The film’s ending is almost clinical, covering an emergency meeting held by the host association, as if to remind us that the help on the table is incapable of fixing everything, and that life with all its unexpected twists and turns will continue not to care about borders or money. Trapped in a constant cycle of destruction and reconstruction, the protagonists of Love of Fate will once again have to learn how to go about living.

Love of Fate is produced by Thelma Film AG, who are also handling international sales.

more about: Love of Fate

After one cancelled edition and another postponed, the FIFF is making its return with 139 films hailing from 51 countries 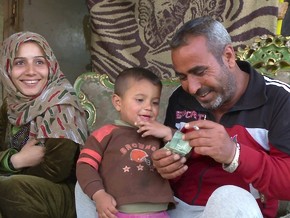